A couple items of note from Knicks-Nuggets.

Good morning, friends. I don't have much for you on this off-day morning, and I doubt the Knicks will practice today. What I do have are a few important artifacts to be preserved from last night's win over the Nuggets. Follow me. 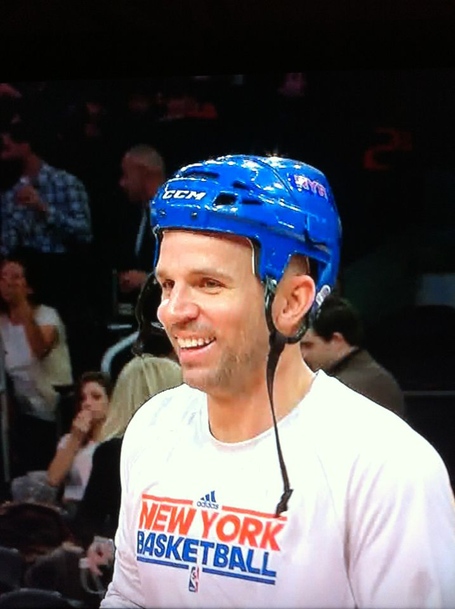 Kidd got a nasty lump on his head (pictured above at about 50% tumescence) after Ty Lawson fell for one of his pump fakes and hit him an elbow. So, at halftime, Jason snuck into the forsaken Rangers locker room, dusted off a helmet, and wore it out for halftime layup lines. I'm actually curious: Is there a rule specifically forbidding helmets (and, one presumes, other types of armor)? There must be.

2. Every Tyson Chandler alley-oop from last night is on YouTube. Here they are in order:

#2 was the coolest finish, but #4 was the crown jewel and a spectacular set run by Mike Woodson out of a timeout. I got that video from Jared Dubin's thorough breakdown of the play. It was gorgeous. Woodson's inbound sets have been absolutely sublime at times.

That's what's up. How are we feeling the morning after a tough victory and three wins in four games in five nights?

Update: Deadspin pulled video of JaVale McGee's exquisitely bad minute in the early fourth quarter. It was crucial to the Knicks' victory, and for that we thank JaVale.