Four home games...and the easiest one might just be against the Lakers.

Good morrow, P&T'ers! It's been snowing all day in Beijing, so I took time to update my Weibo profile.

For those of you who don't know, Twitter is banned in China to make way for their own censored version. Since I can't use Twitter, I have to use China's Weibo to read news about how Japan sucks and to satisfy my puppy and kitten video fix...yeah, everyone in the world posts those kinds of videos. What do you think of my new profile photo? 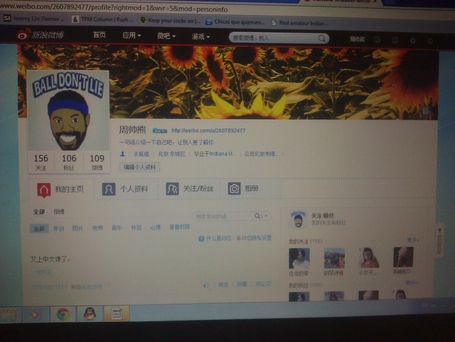 The Chinese have been confused thus far, but someone needs to teach these people about the connection between ball and lie.

As for the Knicks: the Lords of the Garden will put their unblemished home record on the line - their next six games are all at MSG, including three against teams that have already beaten them this year. It seems likely that the home winning streak will fall sometime in this stretch. Of course, the Knicks have made a habit of spitting in the face of the "experts" who pick them to lose. LET'S WIN 'EM ALL! 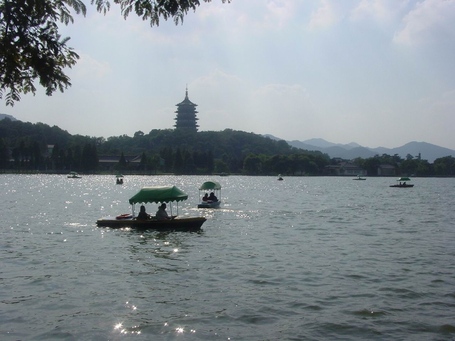 That is a photo of the legendary West Lake, located at the edge of the city of Hangzhou. Hangzhou, a former Chinese capital during the Southern Song Dynasty, is now a thriving metropolis with a population of over 6.4 million. Unlike a certain city in Southern California, it actually has a lake. Why do I bring this up? Well, the United States owes China a butt-load of money, and China absolutely worships the Lakers. If those morons in Washington are really interested in solving the debt crisis, how about going to recently-elected Communist Party chairman (and basketball fan) Xi Jin-ping with an offer: square the debt and we'll give you the Lakers. Now that's what I call fiscal responsibility!

Now, on to the preview!

It's hard to feel sorry for a multimillionaire who's rocking such a full, hearty mustache, but D'Antoni really jumped out of the frying pan and into the fire. The losing and drama in L.A. predated D'Antoni's arrival, just like it did in New York, but there seems to be nobody outside of the Buss family who think he's really the man to fix this mess.

If I may speak to Mike alone for a minute:

Hey Mike, it's Joe. Long time, no see. I hope there's no hard feelings about what went down last season. It wasn't you, Mike, it was the Knicks.

Anyhoo, it seems like you're in a bit of a pickle out West. You don't need this kind of drama, Mike. Listen, I just came back from Italy last month, and now that I'm working again all I can think of is going back there to chill out all afternoon in some Florentine alley, in the shadow of the Duomo, drinking wine and eating risotto. I don't have your money, Mike, and I can't speak Italian like you can. What the hell are you doing in L.A.? If I were you, I take Dolan's money, buy a villa on Lake Como, and basically say "FUCK URRYBODY!"

Now that I got that off my chest, let's get to the actual match-up. I'm a bit terrified of this game, but not for any reasons that could be considered rational. The Lakers play at a high pace, and the Knicks have struggled against teams of that ilk (Dallas and Houston in losses, Phoenix and Denver in close wins). But the Lakers lack the quickness of those teams - especially in the back-court. Their lack of quickness on the perimeter also should allow the Knicks' shooters time to get open. The presence of Dwight Howard in the paint should be negated (somewhat) by the fact that the Knicks don't venture into the paint much anyway, and the Knicks have enough crafty veterans on defense to throw at (read: foul) Dwight when he gets the ball. Hopefully Sheed's foot is feeling better (and if he faked the whole thing to get rest, then hopefully he feels rested) because he might prove crucial on the defensive end.

So why am I so worried? This is probably a nervous tic left over from my days watching terrible Knicks teams, but I never like playing a talented team that's riding a losing streak. The last game against the Nets comes to mind: the Nets had been riding an embarrassing losing streak, but they came out on fire against the Knicks. And the Nets, good as they are, are led by Deron Williams, whom I fear much less than a certain African Savannah snake.

Ladies and gentleman, it has arrived: the day we've all feared. We can no longer escape the horrifying truth...

THE CLEVELAND CAVALIERS ARE COMING!!! PANIC!!!

Why should you, too, be knocking down clowns and grandmas? Let's take a little trip through history, shall we? In 2010-11, the 19-and-63 Cavaliers, the team that set a record for consecutive losses, went 3-and-1 against the Knicks. The Knicks managed to improved somewhat last year, winning two of their four match-ups, but one of their wins came when Kyrie Irving was out with an injury. Well, Kyrie Irving came back last night from a prolonged finger injury because of course he did.

So who are the Cavaliers? It doesn't matter who they are! This is Trap Game Armageddon, people. The Cavs are ranked near the bottom of the league on both sides of the ball. Outside of Irving and Anderson Varejao, they don't have a player who even approaches league average by either PER or WS/48. But the Omri Casspis and Boobie Gibsons of the world are about to go nuclear on the Knicks. Varejao, Tristan Thomas and Samardo Samuels are all about to notch a double-double. Irving will waltz through the paint at will, knocking down and-one lay-ups or kicking out to Boobie and Jeremy Pargo, who will make 12 consecutive threes. Luke Walton might even get spin...LUKE FREAKIN' WALTON!

In conclusion: the Knicks are losing this game by 62 points.

When I was in fourth grade, a second-rate Globetrotters outfit called the Harlem Wizards visited our school and played a game against the faculty, which in our school consisted of a few elderly, portly nuns. Hijinks ensued, blindfolded half-court shots were hit, and a good time was had by all. But the sadist in me couldn't help but wonder what the game would have looked like if those wannabe Globetrotters had really tried to embarrass those nuns on the scoreboard, and if they had gotten every single call from the refs. I now know the answer to that question, thanks to the brutal ass-whupping the Rockets threw the Knicks on Nov. 23.

This team was last seen playing one of the most entertaining games of the year so far: a 134-126 OT loss to the Spurs. Jeremy Lin went absolutely bananas in that game, and the Internet was abuzz with rumors of a Linsanity comeback. If the Internet has the power to bring back "Arrested Development", then why not Linsanity?

What the Spurs game proved is that Lin can still be a fine player if he's hitting from outside. But he's only a 32% three-point shooter even after that 4-for-5 effort against the Spurs, so the pressure is on Lin to refine that outside shot. Too bad he can't work with the world's greatest shooting guru, Dave Hopla, amiright?

This game will be fascinating. In the bad old days, when a team would embarrass the Knicks you could count on the team to come back in their next meeting and...get embarrassed slightly less. This Knicks team has only truly been embarrassed in one game so far, and they're about to get a chance for revenge. I'm really starting to think that the Rockets are just a terrible match-up for the Knicks. They are built to exploit the Knicks' biggest weaknesses: they're quick on the perimeter, the play up-tempo, and they have a rebounding beast in Omer Asik. Also, Chandler Parsons might just be the Antichrist.

How can they turn the tables on the Rockets at the Garden. For starters it might help not to let James Harden make 16 free throws. The Knicks' defense has seemed a bit more foul-prone than usual, and that plays right into Hardens game - he's 3rd in the NBA in made free throws. As a team, Houston is 5th in made free throws and 5th in free throws per field goal attempts. A little bit of MSG home cookin' from the refs might help here, but the key to this game will be smart, disciplined defense, both on the perimeter and at the rim. Oh, and some holy water to throw at Chandler Parsons...I'm on to you, buddy!

Already??? Good Lord. This time the game will be played at New York's (and the world's) Most Famous Arena, and Brook Lopez should be back, but come on...what more is there to be said about this game?

Wait...I just thought of something to say: "Fuck the Nets!*"

* back by popular demand