Is it just me, or does Andrei Kirilenko look like Winter Warlock from the classic TV special "Santa Claus is Coming to Town"?

Here's a photo for comparison: Andrei could definitely be the dude's nephew. 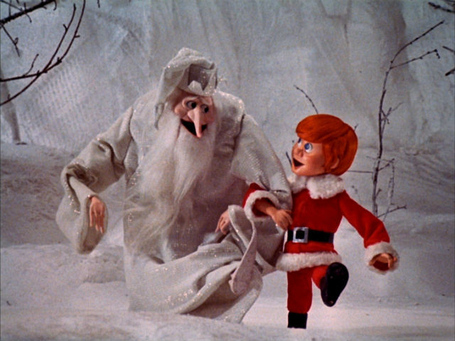 I'm sure some of you are curious as to what Christmas is like in China....in a word: shitty. Imagine all of the over-commercialization you've come to hate from Christmas, except without any family or days off. The shopping malls are all decked out in Christmas regalia, and in China there are three malls to every street corner, but it's not an actual holiday, so I'll be working. Lame.

Now for some good news: I'm happy to announce to the P&T community that I'll be moving the wife and the cats back to the good ol' U-S-of-A in the spring. I figure six years overseas is enough...and it might be fun to see the Knicks in person again now that they are no longer a big steaming pile of dookie. So I guess I'll have to change the name of these previews next year.

As for the games: last week I predicted that their easiest game just might come against the Lakers. I was looking like a genius...until the second half of the Nets' game, when the boys from BK crapped all over themselves in the face of Tyson's dunk barrage. Way to make me look stupid, Tyson, you big jerk!

Oh dear God. I was just kidding, my man....PLEASE DON'T DUNK ON ME.

Update: the Knicks are now below .500 against teams with the cow character in their Chinese names (1-2). Pick it up, boys!

"And I looked, and behold a pale horse:

and his name that sat on him was Robert Randolph,

and Hell followed with him."

Welllllllll well well...looks like we got ourselves a good old-fashioned Mayan Apocalypse Friday Night Knicks Showdown. Of course the Knicks are playing on this night...it's right there in the Popol Vuh, people! The hero twins, Hunahpú (the Mayan word for 'Knickerbocker') and Xbalanqué (a.k.a. the Chicago Bull) get together and play a ball game. After the game, the lava and meteors start raining down and bada-bing! Apocalypse!

Nice. The Knicks won this game despite a horrid 5-for-21 performance from Amar'e thanks to the efforts of Ray, Gallo and -gasp- Toney Douglas, who went off for 30 points - a vintage case of DWTDD.

And here is Ray's line from the Christmas game at the Garden:

Also nice. You might be surprised to learn that Toney didn't also score 30 in this game. That's twice Ray has put together a 20-point, 10-assist game against the Bulls.The Knicks traded him before the next meeting, a loss in April, 2011, and the Knick lost three of four games against the Bulls last season.

Now, as you all know, Ray played like ass last time out against Chicago (9-30 from the field = ass). So what changed? Well, Derrick Rose played in both 2010 wins, so....umm....maybe Derrick Rose should play?

Ray isn't exactly the most consistent point guard in the league, and he has been quite since injuring both hands, but he has shown the ability to make some hay against this tough Bulls' defense. Melo will be playing this time out, but I think Ray could be a key in this game - if he can improve his shooting and decision-making, the Knicks should be able to put together a consistent offense. 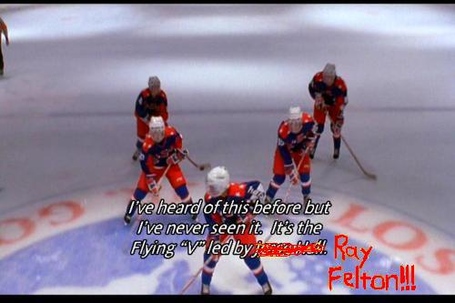 Like the Knicks, the T-Wolves hit a bit of a rough patch in the preseason - losing Kevin Love to injury, not to mention being accused of destroying everything Dr. King and Jackie Robinson fought for. (Question: if I don't care about the Wolves, does that make me more racist or less racist?)

The team has managed to tread water thus far, alternating winning and losing streaks leading up to last night's shocking upset of the Thunder. They've managed to survive the loss of their star players thanks to a bounce-back year from former Jazzman Andrei Kirilenko, who probably spends his off-seasons hiding under beds to frighten children. Seriously, just look at that monster - I literally peed in my pants while cropping that headline photo. It still boggles my mind that the Nets didn't sign this guy in the off-season - the man was obliviously created by Soviet scientists to play for Nets owner Mikhael Prokhorov, and every Bond villain villain needs an over-sized goon to do his bidding. I really think the Knicks dodged a bullet on this one.

This game will be the MSG debut of shoulda-been-Knick Ricky Rubio. You'd better believe I'm still bitter over losing out on Rubio in the 2009 draft. Remember the heady days of 2009, Knicks fans - when the fanbase had become tortured unto the point of delusion and we all lived in a collective fantasy world where we could force any player onto our team by sheer will? Those were some great imaginary teams we had! Rubio looked good playing with Lebron and Chris Bosh, but he couldn't get much playing time behind Chris Paul and the mid-eighties vintage Magic Johnson we acquired using our trade exemption and time machine.

The Knicks are probably catching the Wolves at the right time here. Sure, their top players have returned, but they haven't had time to mesh. At the moment, this team's strengths are pretty much the polar opposite of the Knicks': a top-ten defense that ranks in the top three overall in both offensive AND defensive rebounding percentage. The same holds true for their weaknesses: 25th in eFG%, 22nd in TOV%, dead-last in 3P%. This might be the most fascinating clash of styles the Knicks have faced yet: a grudge match of "possession-and-threes" offense vs. defense and rebounding, live from the Garden!

If I may be allowed to quote from the Gospel According to Dre, the Knicks will be celebrating the birth of our Lord in "that Sunshine State, where the bomb-ass hemp be...and pimps be on a mission for them greens." (California Love: verse 1, line 7-10)

Like those pimps, the Lakers will also be on a mission (though not for them greens...they've all been pretty well-compensated by this point). They are trying to claw their way back to respectability. Paul Gasol has already returned, and Steve Nash should be ready to play by Christmas. (An aside: if ex-Sun Steve Nash is ready to play by Christmas, and ex-Sun Amar'e Stoudemire is not, then Santa Claus screwed up royally. I'm watching you, Santa!)

What did we learn from their meeting? Not much. The Knicks came out on fire, and the Lakers made it a game in the second half after Dwight Howard knocked Carmelo Anthony out of the game. Strike that - we did learn something: we learned Dwight Howard is still a douche. We also learned that, with Dwight and Kobe on the same team, the Lakers lead the league in guys whose heads are too small for their body.

Living in China, this was the least satisfying win over the Lakers I've ever witnessed. The Chinese, who don't quite understand the concept of team sports, went totally ape-shit over Kobe's 31-points-with-a-backache performance. I had to deal with compilations like this, set to crappy inspirational music, for the next few days...and my team won! It would be hard to say Kobe is having a better season than Melo, or vice-versa, simply given their stats. Check out the similarities in their per-36-minute numbers:

Kobe has a substantial edge in games played (though his buddy Dwight had something to do with that), but Melo is getting most of the MVP talk this season for the reason players have always gotten MVP talk, in every sport: he's winning. Melo was in the middle in the of a transcendent game when he was taken out in mid-air by Dwight. I demand satisfaction! All I want for Christmas is the 40-point performance from Melo that we were so cruelly denied. Also, I want one of those Chinese Melo compilation set to crappy music. I don't think that's too much to ask.

Don't remember their earlier meeting at the Garden? Here, let me refresh your memory:

Yep, that was the one. The Suns have proven themselves to be one pesky-ass team. The Bright Side of the Sun Guy came on Seth's game preview and was all like, "This team has made a habit of staying in games," and we were all like "LOLZ dude whatever!" And then the Suns went out and did exactly that...they made what should have been a blowout into a game the Knicks had to sweat until the very end. This team isn't overly talented - T-Wolves fans are still rejoicing at the fact the Suns took Michael Beasley and Wes Johnson off their hands - but they come to play, and the Knicks will be playing their second Pacific road game in two nights, possibly while still suffering from egg nog hangovers. I'm a bit worried about this game.

There's not much else to say about this game, so I'll put do what ESPN writers always do and pull some random conjecture out of my ass. I know everyone is excited at the prospect of a Christmas return for Amar'e Stoudemire, but if I had to guess, I'd say this is the date Amar'e has circled on his calendar. The "STAT vs. Nash" angle would be cute and all, but their isn't really any bad blood between those two players. I'm pretty sure, however, that bad blood still exists between Amar'e and Suns' owner Robert Sarver, who didn't seem to think he was worth a max deal. Sarver has been proven right, of course, but I'm sure that rejection still burns a man who has suffered his share of professional indignities these past few years.

Vintage 2010-11 STAT definitely enjoyed playing the Suns: he dropped 23 against them in a win in Phoenix and a Knicks-career-high 41 in a loss at the Garden. I'm not even going to bother looking up what he did against them last year, since I'm doing my best to convince the world that last year's Amar'e never really existed. I'm sure Amar'e can't wait to join in on what (so far) has been the Year of Knick Redemption, and what better way to start than with a old-school STAT game against Phoenix?