Merry New Year, P&T! The Knicks will be ringing in 2013 with an old friend (and no, I'm not talking about Amar'e). Lord only knows who will or won't suit up for the Knicks during these next four games. If they play with any semblance of consistency, they could easily come away with three wins...but consistency has been pretty hard to come by these days.

On to the previews!!!

This might just be the Knicks' last-ever visit to...what the hell is it called now? Sleep Train Arena? Seriously?

All joking aside, though, I think most basketball junkies have fond memories of the Sac-town fans making life miserable for opposing teams in the early 00's (I still chuckle at the thought of Phil Jackson stewing petulantly on the bench with his earplugs). Also, the band Cake once made a song called "Arco Arena" - which I'm listening to even as I write this - and Cake is awesome. Such a tragedy.

As if to add insult to injury, the Kings have responded to their depressing relocation drama by fielding a pretty damn depressing team. The best news to come from the Kings so far this year has been the improved sophomore campaign of Jimmer Fredette (.454 FG%, .405 3P%) - though for some reason the Kings only let the Jimmer Man on the court 13 minutes each game (feel free keep that up against the Knicks, please). Tyreke has made the transition from "exciting rookie volume-scoring faux-point guard on a bad team" to "disappointing veteran volume-scoring faux-point guard on a bad team" look exceedingly smooth.

And then there is DeMarcus Cousins. Woooo boy. It looks like he'll be reinstated in time for this game, which is bad for the Knicks...unless he gets ejected or something. He's one tech off the league leaders (including some dude named Melo), but I feel like this is the year Cousins steps up his game and finally fulfills his desTiny - he was fourth in techs his rookie year, second last year. This man was created by the good Lord to draw technical fouls. Seriously, look at his ESPN player profile picture - the guy looks like he daring you to T him up in his promotion head-shot.

The saddest thing about this match-up is that DeMarcus won't get his chance to learn at the feet of the master - Rasheed Wallace is not expected to play, and I doubt he'll even make the trip. Mr. Dolan, if you can find it in your heart to fly Sheed out to Sacto, I will give you the sum of five American dollars (I have it, trust me). These two guys need to meet. Somebody needs to teach Cousins how to draw T's while not alienating teammates. It seems to me that Sheed's shenanigans are more cheeky and fun...and Cousins' shenanigans are more cruel and tragic...which makes them not really shenanigans at all... 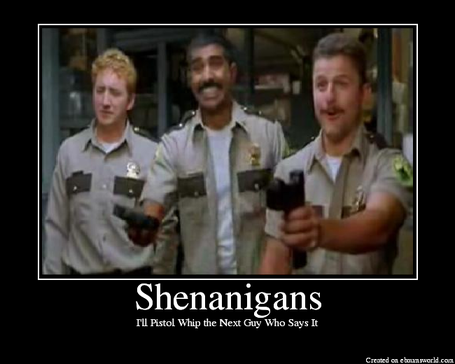 Though the Blazers currently reside at the bottom of the league's most balanced division - the Northwest - they are a .500 team that has played some pretty good ball of late. This will be the Knicks' first look at rookie point guard sensation Damian Lillard, J.J. Hickson and LaMarcus Alridge make a pretty formidable front-court, and...

I'm sorry, but I can't pretend this is just another game. Jared Jeffries is coming back to the Garden! Sure, we're all probably just going through the motions until he is inevitably released by the Blazers and rejoins the Knicks (third time's the charm!) but this seems like a good time to celebrate the man. And since I am not nearly qualified enough to discuss the JJ phenomenon, I thought I'd bring in a guest speaker. Please join me in welcoming the world's foremost Jeffries scholar, and the man who taught Will Leitch everything he knows, Bluecheese999:

First of all, thanks to Joe for allowing me this segment. My one regret is that I don't know the Chinese name for Trail Blazers but I'm sure he'll have that covered (Ed: Now you know...and knowing is half the battle). It's been fun writing the JJST Memorial Fun Facts of the Night but it always feels like there's something missing when Jared Jeffries himself isn't involved. I was actually considering going to the return game but, as many of you already know, Jeffries has never missed a shot in a game I've gone to and I didn't feel it would be right to jinx the Knicks like that.

When I realized that Jeffries makes his return to the Garden on New Year's Day 2013 and that 13 players have played for the Knicks so far this season, I thought it would be fun to compile a list of 13 Fun Facts. Each Fun Fact compares Jeffries to a current Knick. The results: I now know that Jared Jeffries is better than anyone on the Knicks. I know what you're thinking, but no I haven't gone crazy yet. Here's the proof:

3. On December 15, 2009, Jeffries had 6 steals against the Bobcats. Jason Kidd may be second all-time in steals but he has never had more than 5 as a Knick.

5. The "greatest shooter in the NBA" Steve Novak has already missed more three pointers (225) in his two seasons as a Knick than Jeffries has missed in his entire NBA career (217).

6. The last time the Trail Blazers came to the Garden, March 14, 2012, Jeffries had the same number of FGs made as Raymond Felton (2), despite Felton playing 18 more minutes.

8. Ronnie Brewer's FG% has dropped in each of the last 5 seasons. Jeffries has never had his FG% lowered in more than 2 straight seasons.

11. Kurt Thomas was once traded along with 2 first round picks for a second round pick. Jeffries was once the centerpiece of a trade for Tracy McGrady.

13. Marcus Camby did not make a FG in his first 6 games this season. Jeffries has never had a 6 game stretch with no FGs in his entire career.

So there you have it; Jared Jeffries would be the best player on the Knicks today. I couldn't end 2012 feeling so low about my team though (after all, they are 21-8) so here are 5 bonus Fun Facts, none of which show the ineptitude of the current Knicks team:

1. Jeffries is one of two players to record a +/- of exactly +50 in a single game this century. The other: Wally Szczerbiak

2. Jeffries has only played in one career New Year's Day game. On January 1, 2010, the Knicks beat the Hawks 112-108 in OT as Jeffries scored 2 points in 33 minutes. That game is best remembered for Nate Robinson coming off the bench to score 41 points after having been benched by D'Antoni for a month.

3. Jeffries has scored more points in his seven career Knicks-Blazers games (27), than he has in his entire 20 game Trail Blazer career so far (21)!

4. The last time Jeffries returned to the Garden as a visitor was with the Rockets on March 21, 2010. Amazingly, despite it being less than three years later, not one Knick who played in that game is still in NY and not one Rocket in that game still plays for Houston!

Oh yes, the Knicks could definitely lose this game. Have you ever heard the old Klingon proverb that "revenge is a dish best served cold"? Well, my friends, there is nothing colder than Jared Jeffries shooting the basketball. 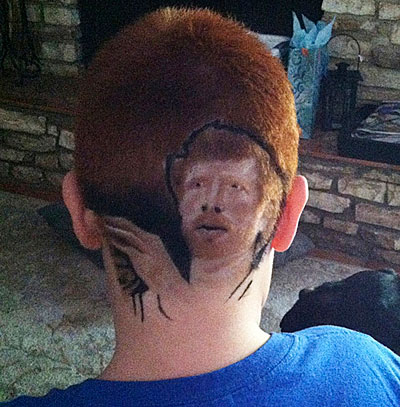 Please forgive me if you've already seen this photo - it's from a May issue of Sports Illustrated. Yes, that is the image of Spurs' forward Matt Bonner shaved into the head of some ginger Texas patriot. There are very few NBA players who are worthy of being shaved into the back of one's head...and Matt Bonner is definitely one of them. You'll be disappointed to learn that this kid was suspended for his act of heroism. When will those fat-cats in Washington learn: if you outlaw shaving Matt Bonner into one's head, only outlaws will shave Matt Bonner into their heads! Anyway, this has inspired the important poll to be found at the bottom of this article - vote now and let freedom ring!

As for the Spurs themselves...uh, they're still good at basketball. They join the Clippers as the only two teams in the top five in both offensive and defensive efficiency. Tim Duncan is having his best season in six years - a fact which few people are really talking about, because...you know...it's Tim Duncan.

The Knicks will be hard-pressed to repeat their performance in these teams' last meeting - the 104-100 victory in San Antonio that probably stands as the Knicks' second-most impressive win of the season, after the Melo-less win in Miami. And who was the Knicks' leading scorer in that game? Just some no-talent ass-clown by the name of Raymond Felton, who scored 25 points on 10-for-20 from the field. Ah, those were some good times, right? I'd like to take this opportunity to point out one thing about the Ray situation: no matter what happens going forward, I seriously doubt he's getting traded. Now, I'm not the Picasso of the Trade Machine, like Bill Simmons (I'm more like the Georgia O'Keeffe of the Trade Machine, in that my trade proposals usually end up vaguely resembling a vagina), but I know that the Knicks are over the cap, so they'd need to find a point guard who is better than Ray and whose salary is less than the $3.5 mil owed to Ray this season, or they would have to start kicking in additional players. I don't see either of those scenarios happening.

With a win in this game, the Knicks would send a nice message to the league that they are still a top-tier team, despite their recent shoddy play. Also, they would do something they haven't done in ten years - sweep the season series with San Antonio. The 2002-03 Knick were the last team to pull off that trick - against the eventual world champs, no less. Check out the box scores from those games. The Knicks' secret weapon: none other than Michael Doleac, who averaged a 15-and-8 in those two games. So the key to victory is clear: BRING BACK MICHAEL DOLEAC!!!

Now is a pretty good time to be an Orlando Magic...ian. (Seriously, what is it with Florida NBA team names? We let the state wield such disproportionate influence over our presidential elections; the least they could do is come up with better names than "Heat" and "Magic") The laughingstock of the off-season Dwight Howard trade have enjoyed some fine returns on their deal thus far:

The Magic game within a game of .500 on Dec. 19. Since then, they've lost Glen Davis to a shoulder injury - he won't play against the Knicks - and have dropped three games in a row. This is probably a good time to catch the Magic, but they are have a top-ten defense and won't be a pushover by any means.

I would hope, however, that the Magic's crap-tastic offense can provide the Knicks with a good opportunity to get back to playing some of that sweet early-season D. This is a team that turns the ball over (29th in TOV%) and doesn't get to the line (30th in FT/FGA), which should play to the Knicks' strengths...emphasis on "should".