Share All sharing options for: Pre-Game Reconnaissance: Knicks at Timberwolves- 2/11/12

What's up with the Timberwolves?

From Tim Allen of the wonderful Canis Hoopus T-Wolves blog:

While all the hype for this game is going to surround Jeremy Lin, the Timberwolves have their own point guard sensation in Ricky Rubio. Unfortunately, Rubio has not played very well over the last week and a half. He has 4 turnovers in each of the past 4 games and is shooting only 30% over that stretch. Combined with Kevin Love's 2-game suspension and some terrible shooting from their wing players, the Wolves have suddenly found themselves in a slump. They managed to eek out a 2-point win over the Sacramento Kings, thanks to a missed buzzer-beater from Donte Greene, before losing games to Memphis and Dallas. In last night's loss against the Mavericks, the Wolves turned the ball over 27 times.

The Wolves have three things going for them this season. Kevin Love is playing like an All-Star, Ricky Rubio looks like a legit point guard option and Rick Adelman's coaching has been a breath of fresh air, especially when compared to Kurt Rambis last season. Nikola Pekovic and J.J. Barea could join that list of good things, but right now, they are both too inconsistent. Wesley Johnson, who still starts at the small forward spot, has been one of the worst players in the NBA; Michael Beasley has showed more effort on defense and on the glass this season, but his shot selection has been typical Be Easy; and the remainder of the Wolves' rotation has ranged from woeful to slightly-less-than woeful.

The conclusion seems to be that in order for the Wolves to win, Love and/or Rubio need to have a stellar performance and they need a solid contribution from at least one other player.

Jose Barea- Jose is considered a pesky floor defender because of his toughness and his ability to burrow into an opponent's hair and lay eggs completely undetected.

Malcolm Lee- Malcolm, confused by the details of his D-League assignment, is now employed as a dental assistant in the practice of Dr. Sue Falls, D.D.S.

Brad Miller- Brad recently set up a "blind" in the Minnesota locker room. He spends hours a day staring at Nikola Pekovic through binoculars from inside a ceiling-high structure that's painted the same colors as the locker room walls and covered in towels and socks.

Ricky Rubio- Ricky waited two years after being drafted to join the Timberwolves because some neighbors of his in Spain were working on a new patio and he just really wanted to see how it turned out.

Derrick Williams- Derrick has asked the Timberwolves to pay out half of his contract with regular checks and the other half in "lunchmeats". He refuses to expound on that request.

Stranger: How are u

You: how are you?

Stranger: Lol so I was gonna chat till I was done

You: sounds good to me!

You: hey, do you know anything about jerry lin?

You: oh wait, it's jeremy

Stranger: Who is that

You: apparently he's a basketball player

You: i have to guard him tonight

You: just wondering if you had any tips, but i guess not

Stranger: So you play baskeybal

You: yes it is very much fun

Stranger: So who am I speaking with

You: i am ricky

Stranger: So what video game are you playing

You: i am sitting cross-legged on a pillow and blow-drying my hair

Stranger: Cool! Forgive me if I don't believe you really play for the NBA and u just so happen upon talking to me

You: that's cool, not a lot of people believe me

You: even in person

You: i think it's because i have such silky hair and elegant eyelashes

Stranger: Are you male or female

Stranger: You don't need to impress me

You: i don't think you understand about this hair

You: touching it is like feeling a cool breeze

You: ok is your laundry done?

'Rome Wasn't Built in a Day!

[Jerome's face superimposed onto the cover of Bob Marley's "Legend"]!

Can you spot Bill Walker in this picture of downtown Minneapolis? Good luck! 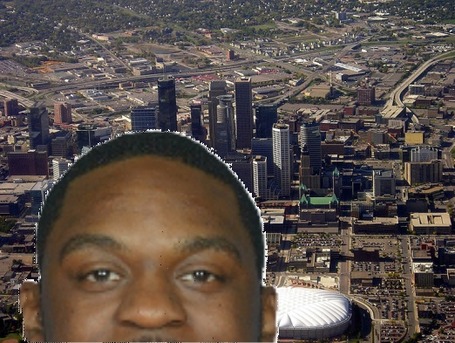 Now you're ready for Knicks-Timberwolves!