This is where Jeremy Lin woke up on the day he became a star.

Share All sharing options for: This is where Jeremy Lin woke up on the day he became a star.

Recall that, the night before his breakout game against the Nets, Jeremy Lin slept over at Landry Fields's place. Landry, who apparently does not have a guest bedroom, set Jeremy up with a spot on his couch. Jeremy went on to drop 25 and 7 against the Nets, then got pushed into the starting lineup and, if I remember correctly, continued to have some pretty good games. This afternoon, Landry was kind enough to post a picture of the couch on the popular social networking site Twitter.com: 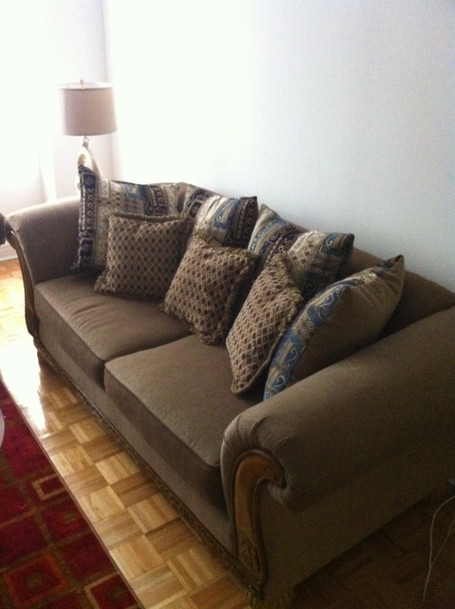 Now, it'd be easy to assume that the couch has magical, performance-enhancing powers like the sneakers in Like Mike. In fact, the couch is more like "Michael's Secret Stuff" in Space Jam. The couch, with its over-sized cushions and seven decorative pillows, seemed like it gave Jeremy the power to dominate games and seize the loving attention of the entire planet, but in fact...THE POWER WAS INSIDE JEREMY ALL ALONG.

Couch looks comfy as shit, though.