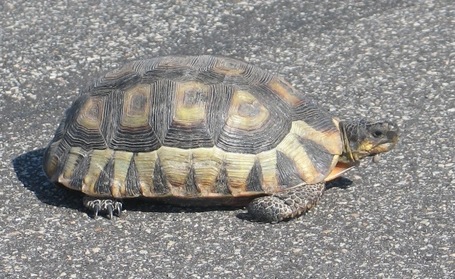 Holy Jeremy, today has been busy. I've got a couple radio things coming up this afternevening-- both of which I'll pass along-- but in the meantime, let me share the dozens of links I've accumulated so I can close all these tabs.

Take the jump for 'em, but be forewarned that they may drive you Linsane.

- I hope you guys love tortoises as much as I do. I mean, I won't be upset if you don't, but...come on. Bowsprit tortoises seem like some friendly cats. Also, I just learned what a "bowsprit" is. It's a thing.

- Here's the transcript of that chat thing I did earlier.

- Here's Mike D'Antoni doing the best husbanding he can from the road on Valentine's Day. In related news, my mom actually gave me a valentine addressed to "Jeremy". No joke.

- Just wrote about this for the Magzeen, but the NBA is reportedly (at least reportedbyFrankIsolaly) desperately searching for a way to rope Jeremy Lin into the All-Star game. Makes sense.

"And then," Jared Jeffries said, "Shump came in and said, ‘Enough of that.’ "

- Oh, and here are some words from an old teammate of Jeremy's.

- Not surprisingly, Jeremy's into some Christian jams.

- Knickerblogger's Robert Silverman stops by the Times to keep the love for Jared Jeffries alive.

- Here's a bit on Amar'e Stoudemire last night, including some words about his new tattoo.

- This piece by Zach Harper on the difficulty of returning to one's normal life and work after tragedy is closely related to Amar'e's situation and is well worth a read.

- Barry Petchesky of Deadspin is not pleased with MSG, nor Time Warner Cable.

- When my friend Jason Concepcion (known on Twitter as @netw3rk) writes something for SB Nation, I'm going to link it. Always.

- China and Taiwan are grappling over Lin. Of course.

- Last thing: The TiqIQ contest is still going on, so go ahead and join in if you haven't already and would like some tickets. As always, click that "Tickets" link up top for all kinds of dealz and stuff.

- Since everybody on Earth has to "weigh in" on Lin and Carmelo Anthony and whatnot, here's Jim Boeheim weighing in.

That's all for the moment, babies! Hope you're having wonderful, bruise-free days.