Share All sharing options for: Spacing and Steve Novak

This post was supposed to be about Jeremy Lin. Sorry if that's trite by now but I wanted to talk about how I think the offense would look with Amar'e Stoudemire and Carmelo Anthony coming back. Plus I wanted to make jaguar jokes cause I think that's how defenders must view him at this point.

Seriously, put yourself in the mind of a defender. Now picture Lin, similar to a jaguar the way he moves so fluidly. He dribbles in place. One dribble. Two dribbles. You've been in this position all night but you're still figuring it out. You're watching his feet now, expecting to feel the weight of Tyson Chandler any moment.

It hits you, left side, and you're pushing to get over it. Shit, you're trailing now but you see Lin hesitate. Wait, why'd he stop? Should you stop? Is that that new Michael Chabon book? And then he lays it up on you.

I wanted to talk about nonsense like that but as I checked the tape, I kept writing notes about Steve Novak instead.

Novak's been going nova for several games now to the point where Mike D'Antoni's actually doodling plays for him. That's significant because he didn't even do that for Shawne Williams. But where Extra E was only good for that corner kickout, Novak's been lethal each time he's fired one off.

Here's one set similar to the three he hit to tie the game against Minnesota. You can see how effective it is in the second clip in particular.

The Knicks are all bunched together on the right side of the floor which confuses the defenders once the play actually develops. First, Fields sets a decoy screen Lin, but the instant he rolls, Bill Walker cuts to the basket along with him and the defenders all naturally retreat to protect the basket. 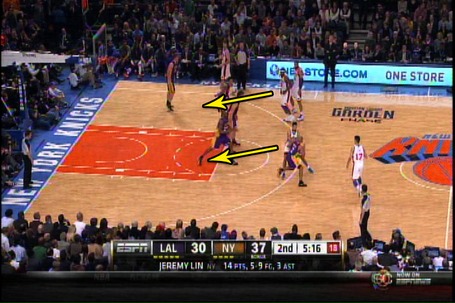 Novak, who's lamping in the corner, simply curls to the space vacated by Bill Walker as his man recovers from helping on the cut. Tyson Chandler's there to set a screen for added protection and Novak gets a wide open jumper. 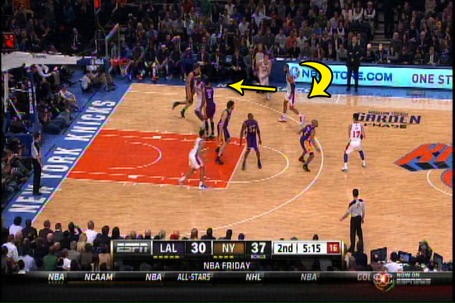 Where they utilize him most, though, is to space out strongside for Lin's pick and rolls.

The play is designed to attack away from Novak, who comes out of the corner and into the wing. This ideally takes his man (generally the other team's 4) out of defensive position, but lots of options open up for the Knicks depending on how the defense plays it. 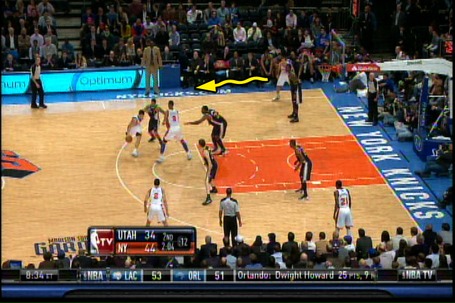 The purpose is to leave the other team's center playing one-on-two with Lin and his roll man. In the first clip, Lin's man literally falls behind and Al Jefferson chooses to contest him and let Jared Jeffries go. Lin wraps it around and Jeffries gets an uncontested layup because Novak's man follows him out to the wing. 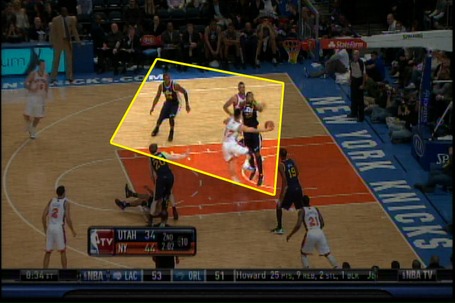 In the second clip, Novak's man chooses to help on the roll so Bibby simply finds him with enough room to be considered a spacious apartment in Manhattan. 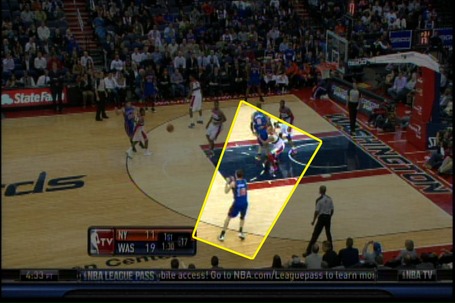 The third clip is an example of how Lin can counteract the hard show that defenses have started throwing at him.

He quickly swings the ball weakside before the big can recover onto Chandler. This forces Kobe Bryant, who shades over to help on Chandler's roll, to shade back to his man in the corner. The rest is easy pickings for Iman Shumpert who lobs it up for Chandler's favorite basketball shot. 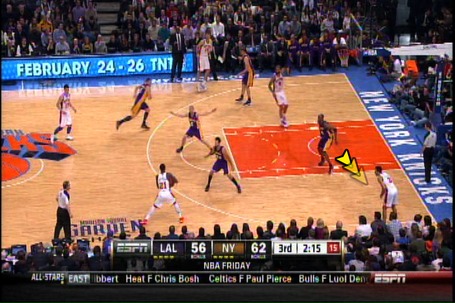 Unfortunately, the team can't survive with Novak playing the stretch four for extended periods with Amar'e coming back. The interior defense would just resemble those from recent years (and nobody wants to see that ever again). But during this stretch, Novak provided invaluable spacing that the team lacked for the first third of the season. Here's hoping he's not completely underutilized now that everyone's on their way back.