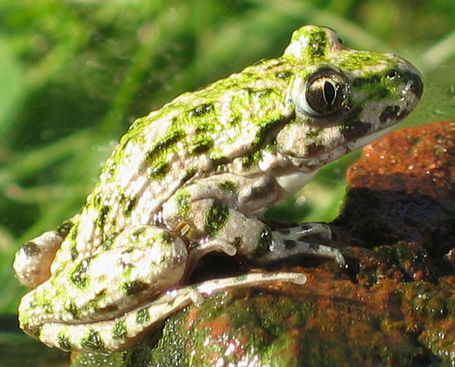 Evening, cubs. Let us not waste any time with idle chit-chat. This is SERIOUS BUSINESS. To the links!

- I think I can see why they're called parsley frogs.

- I went on with the lovely Disciples of Clyde podcast (just Dan) late last night to mutter about the Knicks.

- Sebastian Pruiti broke down one of my favorite plays from the Kings game.

- Jeremy Lin's given a lot of credit to Kenny Atkinson for preparing him for NBA competition, and Frank Isola wrote a pretty good article(!) about their relationship.

- In a way, I'm kind of sad that DDeadspin found videoo of Renaldo Balkman's final play as a Knick, because I'd been certain that Humpty had deliberately donated the ball to Isaiah Thomas out of the goodness of his heart. Not quite the case, though Humpty's heart is still as good as they come.

- Some questionable nicknames for Iman Shumpert!

- I dunno if y'all read David Brooks's piece about Jeremy Lin, but...yeah, I'd just skip right to this.

- The Onion has just been all over the Knicks lately, which makes me very happy.

- Landry Fields, not Lin, will represent the Knicks alongside Cappie Pondexter and Allan Houston in that Shooting Stars thing. LIN GOT SNUBBED.

- Got 'Em Coach made a nice little video of Knick fans milling around the Garden in the height of Linsanity. You'll smile and probably shake your head a bit as well.

- Knickerblogger's got some solid stuff up today. Just, like, go check it out in general. Look around. Smell stuff.

Thanks for reading and clicking sometimes! Knicks are at 8 tonight.