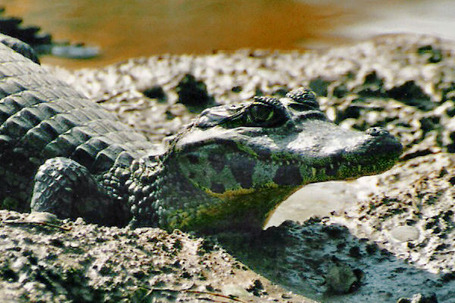 Good afternoon, doorknobs. I, like you, just ate a bagel and am looking forward to tonight's Knicks game. Just like you, I'm amazed to find myself looking forward to Knicks games instead of dreading them. You and I aren't taking that for granted, are we? We ought not to. In the meantime, I think you and I both would like to peruse some Knicks-related links.

Let's take the jump. Together. You first, though.

- Caimans, as far as I know, are mostly smaller, less threatening versions of alligators. Yacare caimans seem to fit that bill. The one pictured up top kinda looks like the Drinking Out Of Cups lizard, doesn't it?

- Steve Serby's "Sunday Conversations" tend to generate some silly responses, and Steve Novak's was no exception. The whole thing is entertaining, but my favorite part is the image of Amar'e Stoudemire studying history by carrying a giant textbook around with him.

- I suppose we won't know about Tyson Chandler's availability until closer to game time tonight, but he wasn't feeling great after the game last night. He's questionable. Nothing's broken, though, which is possibly the best news of all time.

- J.R. Smith joining the Knicks encouraged me to follow him on Twitter, which has led to two realizations: 1. I've learned that J.R. Smith is a Twitter addict. His uninterrupted spurts of Twitterhea are unlike anything I've ever seen. 2. I've learned that I'm a J.R. Smith Twitter addict. I read everything and look at all the photos and am beginning to lose my grasp on my own sense of self. I don't know where I end and Earl's Twitter begins. Anyway, Earl's got a new toothbrush. Looks like a pretty choice brush, too, with an ergonomic shape and some of them stiffer bristles up top. Excellent choice. It's got me wondering what the other Knicks use to brush their teeth, too. I bet Toney Douglas goes electric, and I bet Josh Harrellson uses disposable badger hocks.

- If you somehow missed all the zany quips that followed Smith's debut game, you can find them here.

- This Sports Science segment turned up by Tommy Dee is typically cheesy and quackish, but the basic points about Jeremy Lin's quickness and quirky yet effective shot release resonate. Both have impressed me to no end over the last two weeks.

- In a similar realm, this New York Times animated thing doesn't tell you much, but it looks AWESOME.

- A nice little snippet from Sam Amick's extended interview with Gilbert Arenas in which Arenas addresses his relationship with Lin. I didn't really think about it, but Lin really has channeled Gilbert on a few of those late-game pull-up threes. All Jeremy needs to do next time is turn and stroll away before the shot drops in.

- Zach Harper offers one of the more coherent and reasonably uncertain evaluations of the Knicks going forward. Despite the BOLD CLAIMS being made by folks all over the place, nobody really knows how it's going to work, and that's okay! That's part of the fun!

- Mike D'Antoni thinks he'll keep finding minutes for Novak, which seems reasonable. It's hard to imagine the Knicks having anything less than a nine- or ten-man rotation once everyone's healthy, but you never know.

- Elsewhere, Stephon Marbury was part of a spectacle that pretty closely resembles some of the Knicks teams he was on (and I mean that in the most adoring way possible).

- A late addition: Shoals on Chandler and Earl.

Those are the links! Enjoy the rest of your afternoon, but try to keep your voice down. I think there might be mummies outside.