This one isn't quite out of my system and, in my post-game despair, I think I glossed over some good stuff, so take the jump if you want to keep talking about last night.

- I think I undersold Baron Davis in the recap, so let's talk about his game in more detail. His first play was a heaved fall-away jumper, which probably caused a lot of people to be like "OHH, BARON", but look back at it and you'll see that everybody inexplicably froze away from the ball, like they all wanted Baron to just get an ill-advised jumper out of his system before they started running offense. After that, even though the Knick offense sputtered, I thought the point guard upgrade was readily evident. Davis got into the lane a few times and made some nice kick-out passes to open guys that just didn't amount to baskets for one reason or another. And again, if the second unit is even getting quality open looks, then something has changed for the better, right?

Also, I've been waiting for good video for Baron's three-pointer celebration, but this is the best one I can find right now:

In case you missed it:

(HD if you want it). Yes, that is Baron pretending to hit a joint with three fingers raised. I like Baron Davis and I'm happy he's a Knick.

- The starting lineup really should grow into a pick-and-roll bonanza. We saw glimpses of it in last night's first quarter. Tyson Chandler'd set a screen for Jeremy Lin on one side of the floor, the defense would come help, then the ball would reverse to Carmelo Anthony or Landry Fields, who'd run a quick weak side pick-and-roll with Amar'e. We saw all sorts of mixing and matching, including a couple instances of Melo as the screener. I just...how could that NOT turn into something beautiful with practice?

- Speaking of which, the Knicks aren't practicing today, which is a bummer. I suppose a day off is needed between successive back-to-backs, but the guys could really use some repetitions with each other before facing Atlanta and Miami. That's gonna be rough.

- Another gem that shan't be forgotten despite the outcome: Landry Fields's aerial flogging of Kris Humphries.

Why oh why wasn't that a turning point? Well, Landry missed the free throw that would have cut it to six, then ran right into Jared Jeffries while attempting a lay-up on the next possession (if I remember correctly). Then the Knicks couldn't stop Humphries and then... 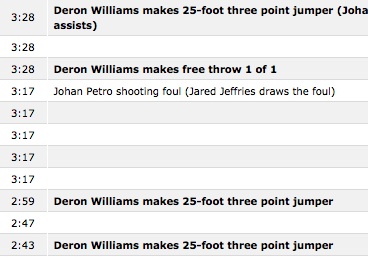 - It disheartens me to see folks giving up on Amar'e Stoudemire. I don't have much more to say about that. His defense is as bad as ever, and I can see that he hasn't been lively at all on offense, but I just can't believe that something is lost, rather than just temporarily missing.

- In a somewhat related note, the idea that anybody-- after all that's led up to this point-- would be in favor of another massive trade involving anybody on this team baffles me.

- Matt Moore's quick examination of spacing and shot selection as they relate to Melo is worth a look.

- Check out Zach Lowe's analysis, too. He's got movies.

So, that's pretty much what's still on my mind the morning after a weird, frustrating night of basketball. I very badly wish I could flip ahead a few pages to see if this season's narrative has another upward arc on the way (because I really feel like it does), but we must be prepared to sit through some sputtering and on-the-fly learning if this is headed anywhere.