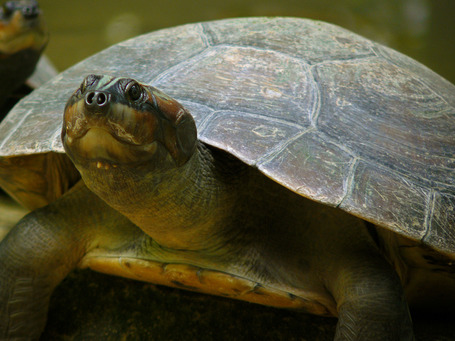 - Turtles, aside from the snapping ones, are pretty chill. Arrau turtles seem especially chill.

- Here are this week's Knicks Power Rankings that I made.

- Jim TrueHoop Cavan's piece about the Knicks on the (almost) eve of Jeremy Lin is goooooood. To read and enjoy. Not for, like, advice about breastfeeding. Not good for that purpose.

- A lot of people have been all like "you know, it's the Knicks' defense that's really gotten them places this season and might suffer with a fuller roster". Tommy Beer fleshes that out.

- At Grantland, Charles Pierce on how this Jeremy Lin thing has gotten waaaay too big waaaay too fast and, like, can't we just shut up and enjoy it?

- And on that note, all the hype has made it way too easy for folks to hate Lin. I can see how easy it'd be to get cynical for a non-Knicks fan.

- It's a little frightening and I can't say I'm quite ready to accept it, but Jamie O'Grady compares a worn-down Amar'e Stoudemire to another Knick who succeeded with his most athletic days behind him. Again, I'm not there yet, but it's interesting and worth recognizing that even a considerably more earthbound Amar'e could be quite effective.

- Alan Hahn is incredibly talented at just settling everything and reasonably establishing the situation at hand. He'll talk some sense into you about the current state of the Knicks.

- Tales of photographing fans of the Knicks (and Rangers) last season.

- The Knicks came up several times in SI's midseason awards. Zach Lowe, for instance, picked Tyson Chandler as the Defensive Player of the Half Year. My man!

- Thoughts on a potential 7SOL-y lineup with Carmelo Anthony at the four.

- For some reason, this doesn't include Lee Nailon OR Mike Sweetney. Massive oversights.

And those are the things! Feel free to make this a thread for the Tuesday evening non-Knicks games if you so please. I love you all very much and you all look very sporting in whatever outfits you're wearing. I mean it!