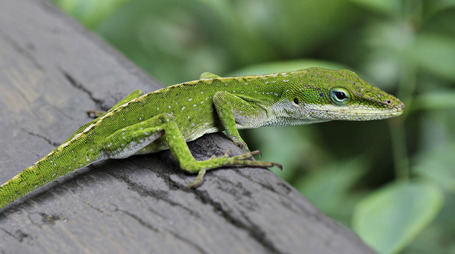 Good day, ombudsmen. I hope you're all having peaceful Fridays. We'll have threads up all weekend for the All-Star festivities. In the meantime, I've just a few links to share.

- I saw a bunch of green anoles in Hawaii (where they're an introduced species) a couple summers ago. The guy who took the above photo must be a genius, because those little cats just wouldn't stay still for me.

- Gian, Osborn, and I all contributed to our friend Scott (WSD)'s midseason Knicks report.

- Jeremy Lin will be considered for the USA Select team, which is cool, but, like, one thing at a time, guys.

- Lin, by the way, is in Orlando along with Carmelo Anthony and Landry Fields (makin' fences). Based on what I'm reading on Twitter, he's also the lone topic of discussion, no matter who's being interviewed.

- Jeremy Lin ice cream with fortune cookie pieces because of course. That doesn't even sound tasty.

- Lin books because, again, of course.

- Here, via commenter jramss, is Carmelo Anthony babysitting some petulant little children. I cannot believe those two guys get paid actual dollars to be on television.

- Jimmy Fallon pretended to be Eddie Vedder and sang about "Jeremy" Lin on his show, if you're into that kind of thing.

And those are the things! Enjoy your afternoons, all.