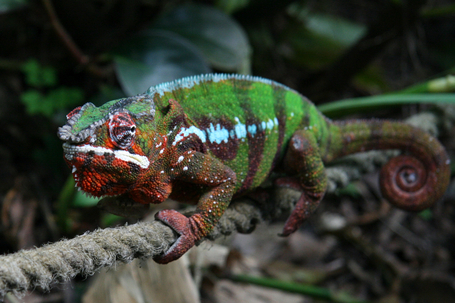 Good morning, cavepersons! The Knicks are finally back at practice today and I'm sure there'll be some reports coming from over there. In the meantime, how about a small serving of links to start your day? Very nutritious.

- Panther chameleons, like all good things, live in Madagascar. Their natural coloring varies wildly depending on where they live on the island.

- Something I didn't know (Knickerblogger's Brian Cronin is good for things like this): The Knicks were the first NBA team to have a roster composed entirely of black players, and thus the first team to play in a game in which only black players participated.

- A suggestion that Carmelo Anthony might see increased success as a roll man...

- ...and a detailed analysis of how poorly Amar'e Stoudemire has played as a spot-up shooter.

"The way that they prepared for our team, for our game, that's something that I would like to take and bring that back to my team," Anthony said after playing in Sunday night's All-Star Game. "Just the preparation that they put into the situation that it worked out."

- Anthony Donahue of TKB's sister Gianna is a cancer survivor, a friend of the Knicks, and the coolest.

That's all for now. Have an excellent morning! Wear a seatbelt!