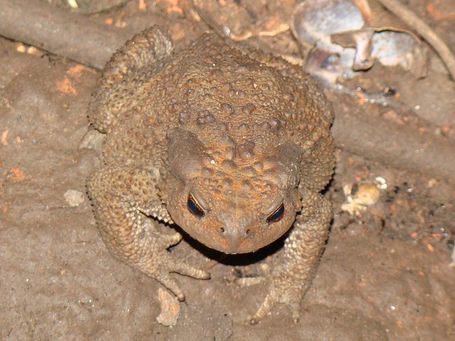 Good afternoon, ribeyes. On this sort of gloomy (weather-wise, not mood-wise, I hope) Wednesday afternoon, I've got a bunch of links (including quite a few Lin-ks) to share with y'all. Take the jump to look at and/or click on them.

- Toads are pretty gross, and Caucasian toads are no exception.

- First order of business: You might not be able to see the Fanpost section right now. It's related to whatever was causing the 503 errors before, and it'll be fixed eventually. Not by me.

- Roughly seven thousand things have been written about Jeremy Lin in the last 48 hours or so. My favorite, predictably, was the one on The Basketball Jones blog by Chris Gethard, who is both excellent and a Knicks fan. It's as much about US as it is about Jeremy.

- Oh, and there's a rap video for him (found via Peter Casey). I'm sure there are like twenty, but this one, via Peter Casey, is remarkably informative without any lyrical slippage. Admirable.

- Alan Hahn says the Knicks' starting lineup tonight and until the stars return will be the same one that started the second half on Monday.

- UM GUYS, were we aware that Michael K. Williams, the man who plays Omar Little and Chalky White, is a Knicks fan? I was not aware and would like to craft a joke about "sparring with the puppies" but I'm too sleepy.

- Jerome James is tryin gto make his comeback in the D-League, which I hope goes well for him. I miss that guy. I don't, like, want him back on the Knicks or anything. He was just always a cool guy.

- Any of y'all Rangers fans? What the hell got Al Trautwig so worked up? Tip of the hat to Brother Soldano.

That is all. Knicks-Wizards is at 7 tonight, and the game thread should be up not long before that. Take extra special care of yourselves, and especially your face and your genitals, between now and then.