Share All sharing options for: Knicks vs. Cavaliers Leftovers

Some remaining thoughts, videos, and links from last night's wonderful win over the Cavaliers...

- First and most important order of business: Which alley-oop from last night do you prefer? You have to pick one and the one you pick determines EVERYTHING for the rest of your life like where you get to live and who you're allowed to talk to and which color hat you get to wear.

Do you prefer Baron Davis's one-hander to the J.R. Smith reverse (and subsequent arm-linked flip-out from the Knicks' starting frontcourt)?

You must pick one and stick with it forever, but I think we can both agree that Bernard King's calls of each play (essentially, "Something happened and I thought it was cool!") are tied for the best.

- Something I noticed in the above videos and from watching a bit of "Knicks in 60" last night: Guys have been BOOKING it up the floor. Even when they're not really trying to fast break, folks really hustle down court for Lin to set them up. Carmelo Anthony in particular kept establishing position so, so early in the shot clock. That's nice to see.

- Forgot to mention this in the recap, but there were a few moments in the first half when it genuinely seemed like we were going to witness a J.R. Smith-Omri Casspi brawl. They kept trying to throw each other places and Smith got right in Casspi's face and yelled something after he made a layup. Praise be to both for keeping it relatively under control.

- I can't find isolated video of this, but via Tommy Dee, this highlight video includes Iman Shumpert's dunk (perhaps his first legitimate posterization) on Tristan Thompson (at 0:15)

Update: Here's video of the Shump dunk alone if you, like, only have 10 seconds to live and can't wait. (tip of the hat)

- Sounds like Tyson Chandler did a lot of shouting at halftime last night. Can't argue with the results.

- Aaron Rodgers essentially gave Twitter consent (and then some) to Steve Novak for his belt celebration. (Also, this.)

- Jeremy Lin's nose bled last night, in case you missed that. Off the top of my head, Lin's lost blood in no fewer than four games since he's been a Knick.

- The first thing I do every morning upon waking up is email my Sports Section editor, Joe, to discuss what I should write about that day. This morning, I woke up several minutes before my alarm was set to go off and, evidently still dreaming, sent him an email that included this line:

I seem to have already been convinced that all of Landry Fields's moves are worth at least one deceiving pause in real life.

That is not a sentence. It does not make a single letter of sense. The funny thing, though, is that I have a fleeting, probably irretrievable recollection of the logic behind what I said. I just know I'll never quite get it back because it is more than likely some nonsense.

- Vurry nice recaps from Will Leitch and Jim Cavan. 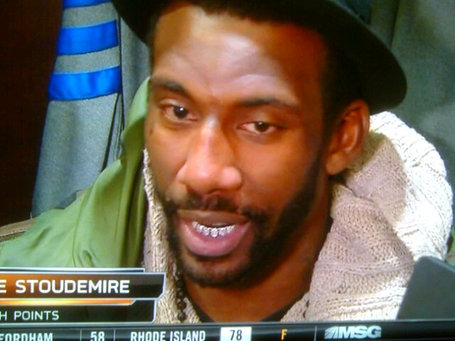 Anyway, that's what's lingering in my brain and on my internets at the moment. WHO YA GOT FOR THE OOPZ? I'm taking Earl-Baron.