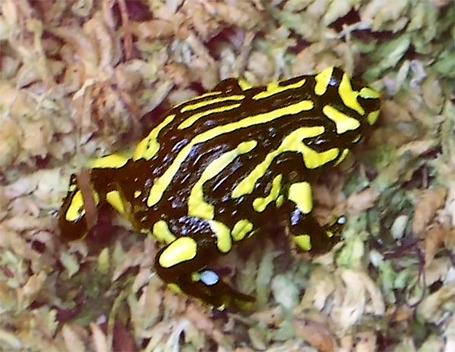 Evening, cookbooks! The Knicks have an 8:00 start against the Bulls tonight, so I figured I'd sneak in just a few links before tip-off and before I eat all this ravioli.

- Probably don't go touching any Corroboree frogs next time you're in Australia. They are poisonous and touching them will make you quite unhappy. Also, their poison consists of an alkaloid that is actually synthesized inside the organism and is not derived from a food source. At least that's what Wikipedia says.

- My friend Ben Mathis-Lilley wrote something about Mike D'Antoni over at The Sports Section that I think is worth a read. It's mentions something I've pondered before: Is D'Antoni just too cool and normal a guy to coach basketball in New York?

- Bulls injury update for tonight (I'll re-post in the game thread in case you're not reading this right now): Yes Noah, no Deng, no Watson, no Hamilton.

- Marc Berman detects some worry that Jared Jeffries's knee (which, I'd forgotten, got surgeried over the summer) is in genuinely bad shape. We'll wait and see.

- Here are some Jerome Jordan highlights from Erie. I see Jeremy Lin in a few of these, so I guess they're not from his most recent stint.

- Via Kurt Helin, here's Iman Shumpert (who's visiting his home of Chicago tonight) compared to an adolescent Doberman by his high school coach.

- This has already been linked, but here's the newest Knicks Kid Reporters. As I said elsewhere, 1. I love these kids and this feature 2. Jaylah can DANCE. I saw her doing the sweetest flips and stuff yesterday.

That is all. Game thread pretty soon!