Jeremy Lin playing off the ball

Share All sharing options for: Jeremy Lin playing off the ball

After three straight wins -- each where the offense scored over 100 points -- it's natural to think that Mike Woodson's system is better suited for these Knicks than Mike D'Antoni's. What's been interesting to see, though, is that the system hasn't changed much at all. Woodson's thrown some a new set or two into the repertoire, and he's certainly drawn up far more interesting plays out of timeouts, but the team is still utilizing D'Antoni's core plays.

The starters are still awkwardly figuring out whose space is whose. The bench is still running a 1-5 pick and roll with three players anchored behind the arch. And Carmelo Anthony is still getting the ball at the elbow. The difference is Melo's more engaged, Amar'e Stoudemire looks a bit springier, and Jeremy Lin isn't tasked with running 60 pick and rolls a game anymore.

And that may be the interesting wrinkle that emerges from this offense: Lin playing off the ball.

Tyson Chandler and Stoudemire are bunched together, shifting weak-side, which keeps the opposing bigs busting up the play. Then Melo comes to his favorite spot off a Chandler screen. 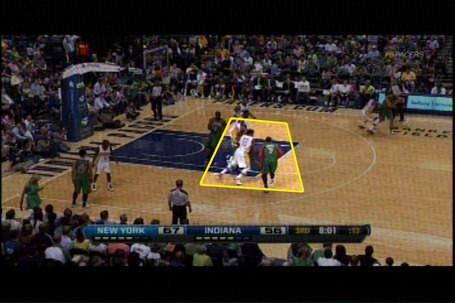 As Melo fights for post position, Lin curls around Amar'e and Chandler who kept on shifting. 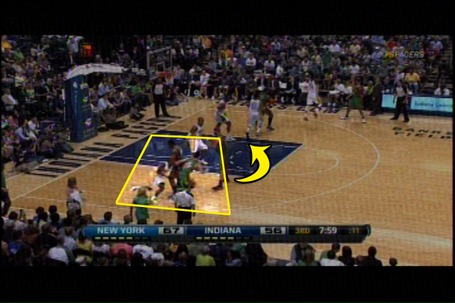 Landry Fields hits him as the Pacers overplay Melo, and Roy Hibbert gets caught looking in the other direction for those two shifty bros. Lin gets that weird runner he loves so much. 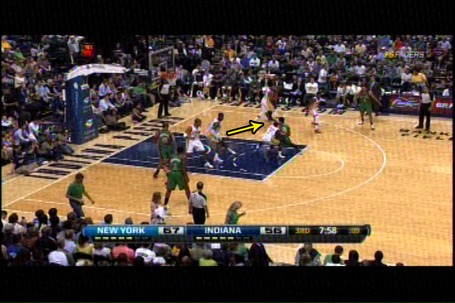 Is this much different from what we've seen from D'Antoni? Not at all. He ran variations of this all the time. What's different is that it's Landry setting up the entry pass, where he'd usually be the one curling, and Amar'e's setting a meaningful off-ball screen instead of just lurking around, humming Lalo Schifrin theme music.

But I like the idea of Lin playing off the ball more frequently. It takes some pressure off him and may limit how often he's trapped by numerous defenders.