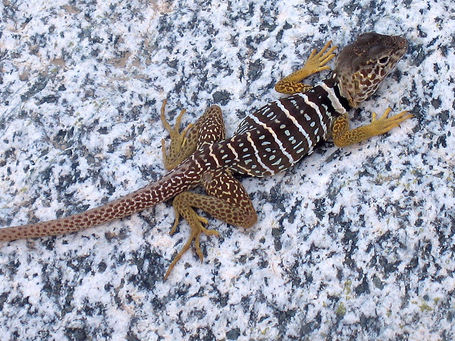 Good afternoon, craisins! I hope you're enjoying your Monday and have had a chance to enjoy the weather and/or the music of The Weather Girls. I collected some links today and over the weekend, and you can ogle them if you take the jump.

- This lizard "can inflict a painful bite" and is a "powerful bipedal runner", which is just a lovely combination of attributes.

- Baron Davis participated in non-contact drills today and is listed as "questionable" for tomorrow's game against the Raptors.

- Marc Berman spoke to Donnie Walsh in Indiana and got some interesting stuff from him:

"With Mike, I felt bad. I thought it was a difficult four-year period because we constantly were changing the team, which is a very difficult thing to do for the coach,’’ Walsh told The Post yesterday. "It was never settled, being rebuilt on the fly. Even in the third year, we broke the team down, added players [in the Anthony trade]. And then this year, the lockout, players were coming in one at a time. But the first two years were very tough.’’

This article's worth a look as well.

- In this article on J.R. Smith's recent hot shooting, you'll find a quotation from Carmelo Anthony specifically mentioning the fact that he vouched for the Smith acquisition. That's not really a thing anymore, but...just something that made me go "brrrf", which is the equivalent of when other people go "hmm".

- Everybody's been emailing me and sending me letters and telegrams and stuff being all like "HELLO EXCUSE ME WHAT SORT OF PAINTING DOES IMAN SHUMPERT HAVE HANGING ABOVE HIS BED?". Here you go.

- Mike Woodson's doing radio appearances this afternoon and tomorrow morning if you're into that kind of thing.

And those are the links. Enjoy the rest of your afternoon! Don't eat any bees!