I hate musicals. From the awful story telling, terrible music, and annoying crowd (mostly blue hairs, a group of people I'm not fond of), I hate the whole experience. My mother knew this, and on our annual trip to the city, she decided take me to Cylde's new restaurant to make up for me sitting through such a a waste of time (Jersey Boys, so you don't have to ask). This is my experience at the newly opened Wine & Dine.

In a neighborhood where there doesn't appear to be too much going on, W&D is a really nice looking store front, complete with pictures of him in all his Knickerbocker glory. 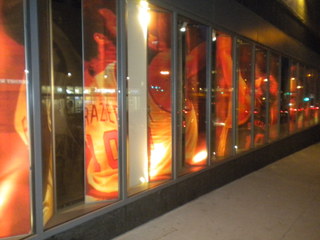 Going inside is a rush. There are so many subtle (and not so subtle) homages to Clyde that I'm sure I missed some of them. The first thing I noticed was the many columns in the place bearing Cylde's steely gaze and impeccable style. By my estimate, the Cyldes must be 12 feet tall.

The other homages weren't so boisterous. The menus, for example, all have patterns on them that Cylde has worn at some point. I was happy when I got a menu with the famous cow pattern. 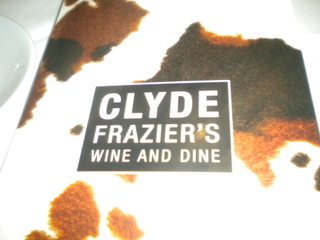 Another homage is the ceiling decorations. At first, I thought it was some generic aquatic themed fixtures, but as I looked closer, I saw that, they too, were tributes to his suits. 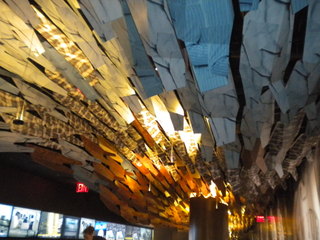 And of course, the basketball court. It's small, maybe 12x28 feet (not my photo), but it is still amazing. It's like playing inside a racquetball court that's inside of a high end restaurant. I was lucky to go when it wasn't crowded, like, at all, so I didn't have to deal with anyone playing when I wanted to, so I balled the shit out of it. 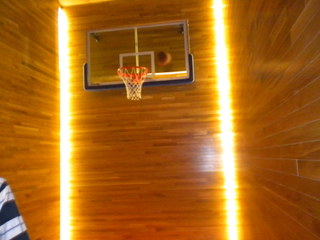 (I wasn't laying bricks like that the whole time)

While I couldn't get any pictures of it because there were always people in it and I didn't want to be rude, the sports bar is great. In the restaurant, there is a total of 57 (!!!) TVs dispersed about the place. In addition to this, there is a great lounge area that I can best describe as a grotto sans water.

So yeah, the atmosphere is unparalleled, but what about the menu? Well, it was predictably pricey (my cheesesteak - one of "Cylde's Favorites"! - was 28 dollars). It was amazing though, as was the rest of my party's food, so you get what you pay for. However, there are some more moderately priced items. So, true to Walt's word, it really is the perfect place to stop by before or after a game. It is also the perfect place for any prospective P&T meetup to happen; cause we would totally take over the grotto and the court and not let anyone else who doesn't know the password (Ronny Turiaf) play and it would be awesome.

- Apparently Walt is going to make a habit of hanging out there after games.

- The official grand opening is April 1st, and if what the waitress told us is true, everyone is going to be there. From Alan Hahn to JR Smith to Spike Lee; chances are if you see them on a Knick broadcast, they'll be there.

- The bathroom situation is really weird. There's a hall way with rooms completely isolated from each other and the rest of the restaurant with toilets in them. But to wash your hands, you have to go out to the hallway, where the sink has a one way mirror, allowing the bar area to see you washing your hands. It's pretty creepy, but a good way to make sure you sanitize yourself.

If you weren't able to pick up on it, I really enjoyed W&D. If you're in the city, you have no excuse not to go. Chairman Meow gives it 4 stars.