Amar'e Stoudemire's bulldog is sick but is expected to make a full recovery.

Share All sharing options for: Amar'e Stoudemire's bulldog is sick but is expected to make a full recovery.

I was going to save this for a links post later, but it's just too big a story to sit on for that long. Those of us who follow Amar'e Stoudemire on Twitter learned some things about him today. Amar'e owns a very handsome six year-old, 67-pound English bulldog named Spudd. Yes, Spudd with two "D"s. Spudd, we discovered, is suffering from a bout of pneumonia and had to be flown in to New York from Phoenix to be with Amar'e and get some medical attention. Here's the infirm Spudd staring wistfully out Amar'e's backseat window: 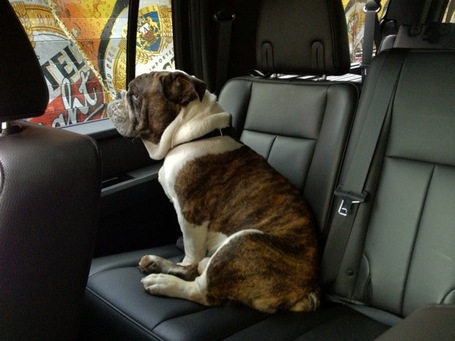 Might wanna give that gentleman a seat belt, but it's an incredibly cute (if woeful) photo nonetheless. The good news is that Spudd has seen the doctor, earned the customary Elizabethan collar, and is reportedly headed for a full recovery. The amount of genuine relief I derived from learning that Stoudemire's dog is okay might be cause for concern, but...well, I'm really happy to hear it. I'll update on Spudd's status as further details emerge.