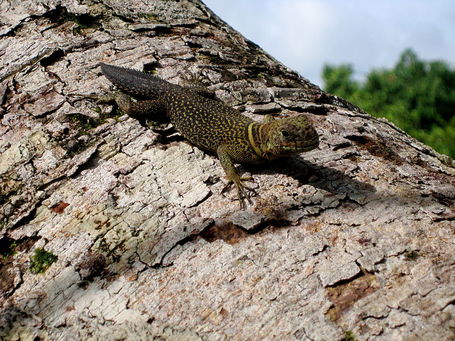 Good Friday, cavepuppets! There aren't too many hours until the Knicks tip off. If you'd like to break up those hours of waiting and shaving and re-shaving your arms, here are a few links to keep you busy.

- They do have some rather thorny tails.

- You'll have to hurt your neck (or turn your computer on its side) to watch this one, but here's Baron Davis trying and failing to scare J.R. Smith (at least I think that's J.R. Smith), via Tyson Chandler.

- Amar'e Stoudemire just says some hilarious stuff, guys. This is how he talks:

- Late on this one, but Jared Zwerling's piece on the significance of Jared Jeffries is great, and there's a follow-up conversation with Tommy Dee up as well now, too.

- They're broadcasting tonight's game in Mandarin, which is cool.

- Transcript of a cOoL cHaT Alan Hahn did today.

- Speaking of which, they're trying to get rid of that "Linsanity" weed. Awwwwww.

- Jamie O'Grady sees a tough two-week stretch in April that could pretty much decide everything.

Those were some links. I hope you liked clicking at least a few of them. They're putting me back in my cage now so goodbye until later.