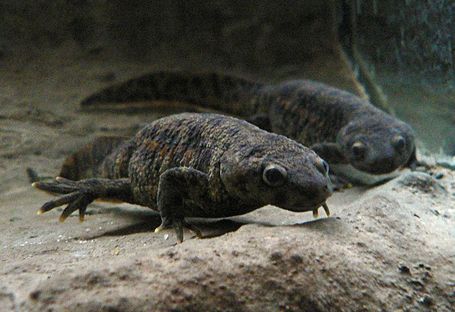 Good morning, duchesses. I know it's early in the day and tasty links are usually an afternoon or evening treat, but it's Friday and you've been so well behaved. Take the jump for some things from around the world wide web.

- Ribbed newts have really sharp ribs that they can poke through tubercules in their skin to stab folks. Iberian ribbed newts HAVE BEEN TO SPACE.

- Howard Beck's profile of Mike Woodson and Mike Woodson's path to becoming a coach is the thing to read today. If you're not a Times subscriber and are reluctant to use up article-views, I assure you that this is worth it. If you're in a situation like that Eddie Murphy movie I keep seeing commercials for except instead of having a spoken word limit it's a read word limit, I assure you that this is worth it. You'll even read a theory about why Woodson shaved off his eyebrows in Atlanta (where he'll be returning, brows intact, tonight).

- Amar'e Stoudemire got that epidural injection, and now it's on him to rehabilitate and strengthen that back and the surrounding areas so he can return to the floor in minimal danger of hurting himself more.

- I did a lot of talking with the cool friends at The New York Knicks Podcast.

- We took a bit of a look at this in the videos yesterday, but Carmelo Anthony has been running shit from the post. He's played wonderfully on those blocks. His defense, too, has been its very best.

- Some Knicks reflect on their NCAA Tournament memories. Mike Bibby's voice startles me every time.

- No Hall Of Fame this time around for Bernard King. It's okay, Bernard. I just made a drawring called "HALL OF FAME" and I drew pictures of you, George Jetson, my mom, and that's it. I drew you in cerulean.

- Nice article by Steve Popper on Baron Davis's contributions and the amount of work he's doing to keep his body from disintegrating on the court.

- No updates on Jeremy Lin yet. I imagine we'll hear about Jeremy after shootaround.

That's it for now. More throughout the day, and we've got the Knicks in Atlanta tonight. Enjoy your Friday morning and remember that you don't have to sign your breakfast pastries before eating them. There is no such requirement. Don't embarrass yourself again.