Share All sharing options for: Pre-Game Reconnaissance: Knicks at Spurs- 3/7/12

What's up with the Spurs?

From J.R. Wilco of Pounding the Rock, who I told about the Knicks:

Well, Tony Parker's been amazing, Tim Duncan's rebound rate is higher than it's ever been, and while Manu's hardly played this year, there are some young guys who've been seeing filling in for him, making the most of their playing time, and helping the Spurs look like a team that deserves to be discussed as one of the four best teams in the league. Since you're likely pretty familiar with the main guys, I'll give you a rundown on the new faces wearing the silver and black.

Our rookie, Kawhi Leonard, is becoming a defensive standout, should see some time guarding Carmelo, is handling the ball a bit more, and is developing his outside shot. Danny Green is a 3rd year guy, but seeing as how he'd only played a total of 28 games in the league before this season (and only 8 with San Antonio) it sure seems like he's a rookie to me. But he started a few BABA's this year, and his defense and athleticism have gone a long way toward making this Spurs team a better defensive unit. The same could be said of Tiago Splitter who's leading the league in field goal percentage and is showing that he can actually block out -- not something that can necessarily be said about DeJuan Blair.

As far as lineup and rotations and concerned, with Ginobili just coming back from this year's second injury, it's difficult to forecast who all we'll see tonight. But it will certainly be based on a complicated formula involving matchups, who's been playing well, who's hot, what phase the moon is in and how long it's been since Pop has been able to make a member of the press break down and cry.

It looks something like the above, where λ (lambda) equals the coefficient of guardplay, t is the playing time (in minutes) each player gets, exprepresents the amount of experience Pop wants in the game at all times, and Δ (delta) is the change in the amount of wine Pop has imbibed in the last week as it differs from the norm (as established by the past 15 years of coaching). While I know what the terms in the formula mean, I can't even pretend to understand it. So, be prepared to be surprised is what I guess I'm saying.

Which brings me to the closest connection that our two teams have ... Steve Novak. He played (and I use that term loosely because mostly he just sat) in San Antonio last year and after training camp, he was signed for the year. Two days later he was waived, causing much wonderment in the Alamo City and I wrote this to describe my hypothesis as to what was going on. Of course it turns out that the Spurs let him go because his agent had found a team that would offer Steve a guaranteed contract and R.C. Buford and Pop are more than glad to help their bench-warmers find better spots.

Who knew he'd have this kind of season, huh?

Kawhi Leonard- Kawhi's daily "breakfast smoothie" includes a whole pack of Skittles still in the wrapper, dew, and half a lamprey.

Pugglebert Ransom- Pugglebert is a person I just invented because the Spurs have too few new players for my purposes, but now I've wasted this section telling you that I invented him and can't share a really cool bit of trivia about him. You guys would have really liked it.

Stranger: how are you?

You: i am well, eating a sandwich sandwich

Stranger: you made me feel hungry!

You: i'd happily make you a sandwich sandwich if you'd like one

Stranger: make me one!

You: what are your three favorite types of sandwiches?

You: what i do is use two sandwiches as the slices of bread, then put a third sandwich in between as the meat

Stranger: you tell me

Stranger: i am a veggie

You: wait you're a vegetarian?

You: or are you in a vegetative state

You: i guess not

You: so you're a vegetarian i take it

You: for your sandwich sandwich

Stranger: what's your favorite one?

You: well i'm a big fan of reubens and meatball subs

You: but those aren't vegetarian, so i wouldn't serve those to you

Stranger: hey you a guy right?

Stranger: so you smoke weed?

Stranger: i mean do you?

You: not in a long time

You: i get randomly tested for work

Stranger: i mean its good that you have smoked weed

You: yeah i suppose

You: wait so are we making you this sandwich or what?

You: i've got the panini press all fired up and my apron on and everything

Stranger: where you from?

You: now i live in san antonio

Can you find Bill Walker in this picture of San Antonio? 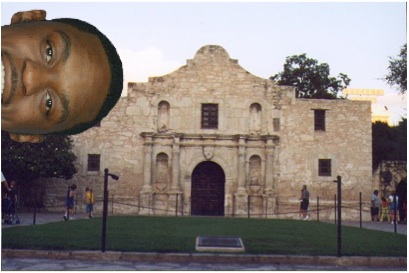 Hey guys, I've finally had some time to settle in an check out Erie. Here are my top five favorite things and experiences in Erie so far:

1. I met this really kind bird named Fancy Ryan. I challenged him to a game of Word With Friends but he hasn't responded yet.

3. I saw this girl drawing on the sidewalk with chalk and I said "Hey, why are you doing that? Sidewalk chalk is for fourth grade babies!" and she said "I am in fourth grade, you tall weirdo!" and I said "Fourth grade was like fifteen years ago! You're the weirdo!". That was funny.

And now you're ready for Knicks-Spurs!