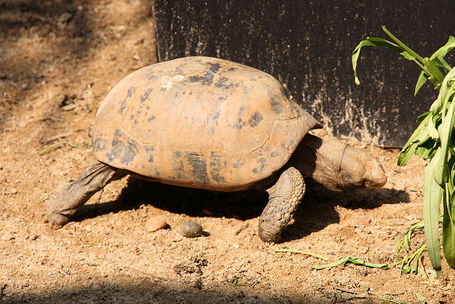 Good afternoon, counselors. Hope you're having a cheerful day. Did you get the package I sent to your office? Oh. Oh...god. You should maybe check your mailbox right now. Oh god, I hope it's still breathing.

Take the jump for some links!

- YO THAT'S A LONG-ASS TORTOISE.

- Matt Moore did a splendid job of examining what, spacing-wise, has worked for Carmelo Anthony since returning, and what hasn't. He spends a lot of time on the weak side of the floor (by design, I assume), but the ball sometimes doesn't make it over there for minutes at a time.

- If you missed it last night, Will wrote about J.R. Smith's rather candid Twitter post. If you guys aren't on Twitter, you should know that Earl tweets CONSTANTLY. Constantly. He takes photos of himself and his surroundings all throughout the day, carries on really blunt conversations with all sorts of people, and shares what appear to be lyrics he wrote himself. You know what he's doing and where he is pretty much all day. It's bizarre and fascinating.

- Ethan Sherwood Strauss wrote a great piece about my friend Rich Twu, who was involved in Jeremy Lin's basketball career very early on.

- And here's a sorta companion piece from the Times about Lin's agent, Roger Montgomery.

- The Knicks are in Steve Novak's home state of Wisconsin tonight, and the reporters got a chance to speak with Steve's dad today. Here's one little gem. Word is we'll be hearing more during the game.

- Another update about the Knicks' possible starting lineup tonight. This is the smallest lineup possibility I've seen yet. I've given up wonderin' and speculatin' until game time.

- Via Russ Bengtson, Rick Ross appears to have located a Jeremy Lin-themed strain of marijuana, and now I have a few new goals.

- Jared Jeffries reportedly got his knee drained today and hopes to be back by next week. I'm certain that if somebody drained fluid from my knee I'd pass out on the spot.

- The scouting reports Ryan Wallace does at TKB are always worth a look. Here's today's on the Bucks.

- Well, Amar'e Stoudemire SAID that he and the Knicks ought to play better interior defense tonight, so that's something.

And that's all I've got for now! We're going to be giving away a t-shirt in an hour or two, so be on the lookout for that.