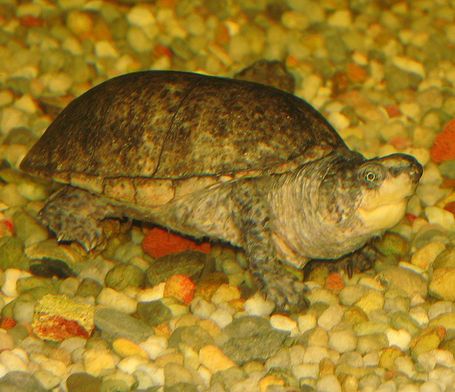 Hey, friends. You're all looking dapper in your onesies. How about we look through a few Knicks links before tonight's game against the Wizards? Would you like that? I bet you would.

- Stinkpots are also known as common musk turtles. Mostly they just swim around, but if you mess with them, they unleash the odorz. These apparently live in our neck of the woods but I'm pretty sure I've never seen one, not even when I used to live in a stream.

- Amar'e Stoudemire worked out with his teammates yesterday, which means that, at the very least, his bulging disc is no longer contagious.

- Carmelo Anthony, responding to a topic being tossed around these days, insists that he has no desire to be paid for his work with the Olympic basketball team. If ever USA Basketball decides to start compensating its players, I will do Melo a favor and accept his checks for him, because I'm a nice guy and a patriot.

- Jared Jeffries would rather face the Bulls than the Heat in the first round. This is important because New York's playoff opponent will be determined by a roster vote.

- Brother Leitch lays out the rest of the Knicks' schedule and plays out pretty much all the possible scenarios.

- Tyson Chandler and Mike Woodson are both super into the idea of Tyson winning the Defensive Player of the Year award, and so am I.

- Via our own irfreak, this Jeremy Lin action figure is quite-- perhaps too-- lifelike. It's eerie. Uncanny valley 'n' shit.

Cool! Hope you enjoyed at least one of those things. Most of all, I hope you and I and we enjoy the game later. See you then!