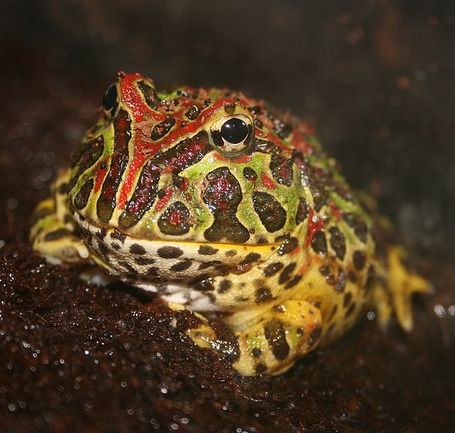 Evening, warheads. Did you have a good day? No? Oh, goodness. You shouldn't let her talk to you that way. I know, but..well hey, how about some links? Would some links make you feel better? Let's get you some links. Have a seat.

Oh wait. Take the jump first, then have a seat.

- Argentine horned frogs are sometimes referred to as "Pacman frogs"! Like, legitimately! Hey gymtanlandry, aren't you in Argentina? Bring us one!

- Here's Steve Novak otter-eating a bagel like it's nothing.

- John Schuhmann includes Landry Fields among the honorable mentions for his "Jason Collins All-Star Team". In this context, that's a good thing.

- This has been linked by a few of y'all, but Steve Serby's "Sunday Conversation" this week was with Iman Shumpert. Iman Shumpert is an athlete on a local sports team.

- Jeremy Lin was a "divisional winner" for the NBA's sportsmanship award. For some reason, the finalists for that award and that award alone are selected from each division. Just 'cause. Anyway, congratulations Jeremy! You're a fine sportsman!

- Some numbers about the Knicks and isolations.

- Marc Berman offered a little transparency regarding his upcoming award choices, which I thought was cool of him (that's right!).

- Some things about how the Heat defended Carmelo Anthony and the Knicks last night, especially durin gthe fourth quarter.

- #9 is a pretty cool Amar'e Stoudemire painting. His legs aren't that thin though! I haven't seen him in a week or two, but I'm pretty sure (found via TrueHoop).

- Some suggestions that Landry Fields is too nice or too laid-back or something. Basically, he's too chill a bro to play basketball for the Knicks.

- Bill Walker was skeptical about the 2Pac hologram thing. (You saw that, right? SHIT WAS CRAZY.)

And those were the links! Feel better now?