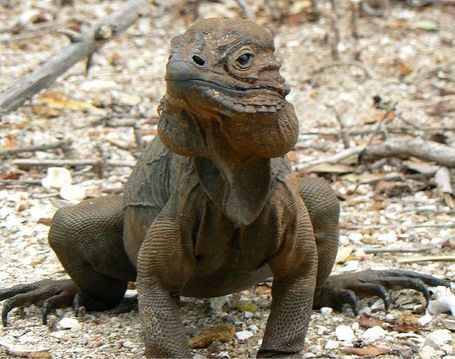 Good afternoon, sandbats! (At what point does the afternoon end and the evening begin? 5:00? I say 5:00). How about a few quick links before the Knicks and Nets tip off?

- I think they call them "rhinoceros" iguanas because they're RATHER LARGE. Or maybe that horn thing.

- One of y'all linked this, I think, but Sekou Smith's article on Mike Woodson includes some fun laffs from a little dinner he held in Atlanta.

- Trey Kerby produces yet another work of unmitigated genius. You can create your very own Woodson.

- My SB Nation compatriot Chris Celletti lists some reasons for positivity as the Knicks head toward the postseason.

- Another look at the newest Knick, 17 year-old Amar'e Stoudemire.

- Something I didn't know, via Jamie O'Grady: If Tyson Chandler wins Defensive Player of the Year, he'll be the first Knick to do it. That means Jamison Brewer never won it, which seems off.

- With injuries and stuff, Tyson Chandler seems like a favorite to make the U.S. Olympic team (assuming his own injuries don't require repairs this summer).

- Rob Mahoney does what I imagine a lot of us have done in imagining how bleak things would have been if Baron Davis was THE starting point guard for the Knicks.

- Among many other things, Alan Hahn mentions that Jared Jeffries will almost definitely need knee surgery this summer.

- Fair warning that it might be difficult to keep Steve Novak around after this year.

- A statistical summary of the worries about the effects of Amar'e Stoudemire's return.

- Anybody have $1,000 and wanna play poker with a bunch of Knicks? Please say yes.

- A few Knicks (and, of course, former Knicks) show up on this list about fashions.