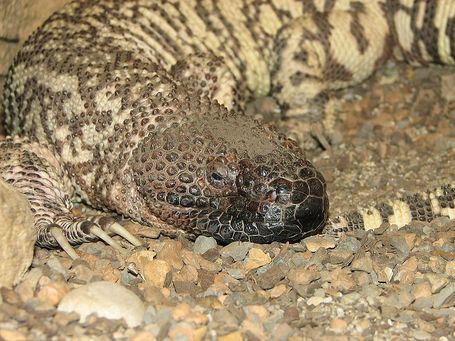 Good evening, children. I hope you are all in good spirits/health/company. We don't have any Knicks to watch tonight, but I do have some links to share and you're welcome to use this post as a thread for the evening's games and whatever else has your attention. Take the jump for those links.

- Beaded lizards are kinda like bootleg versions of gila monsters. Same genus, not as cool.

- To nobody's surprise, J.R. Smith is expected to decline his option for next year and look for a long-term contract this summer.

- A li'l chart our friend Jared Dubin passed along recently that shows how much worse the Knicks' defense has been in the second half, and especially in the third quarter.

- Earl and Steve Novak's brilliant shooting against the Celtics, set to Ice Cube's "It Was a Good Day".

- Yes, as you've probably seen elsewhere, Carmelo Anthony has a painting of himself hanging above his mantle. As a matter of fact, instead of a mirror, he owns pictures of every single face he could possibly make. Actually, not that second thing. (As a follow-up, check out what Shoals posted from Melo's Denver days.)

- I know he's not a Knick anymore, but I just can't quit this guy. Just look at him.

- Over at his really elegant-looking website, Kirk Goldsberry shows us how Carmelo Anthony really likes to shoot from the spots from which he's good at shooting. Makes sense.

- A very nice look at how the Knicks stack up relative to other teams in terms of injury-related depletion this season (check the graphs) and over the last three years.

- Keith Schlosser makes the case for starting Mike Bibby. Based on his recent play, I certainly wouldn't mind giving Bibby more minutes than Baron Davis gets. Something tells me Baron wouldn't mind either.

- I was surprised to see ?uestlove DJing at the game the other night, given that he's a Philadelphia guy. Well, apparently those Philly ties only run so far.

- In appreciation of the weird, wild J.R. Smith (and another John Starks comparison).

Them's the links. Again, use this thread for whatever. I'm watching Bucks-Pacers at the moment.