Jeremy Lin had his operation, a sandwich.

Share All sharing options for: Jeremy Lin had his operation, a sandwich.

This hasn't been announced by the Knicks or officially reported by anybody yet, but it did go up on Facebook (2012, right!?!?): Jeremy Lin underwent and apparently survived arthroscopic surgery on his left knee to repair a torn meniscus today. So there's the answer to that question. Here he is in his hospital bed, trippin' ballz post-op, via his own Facebook page: 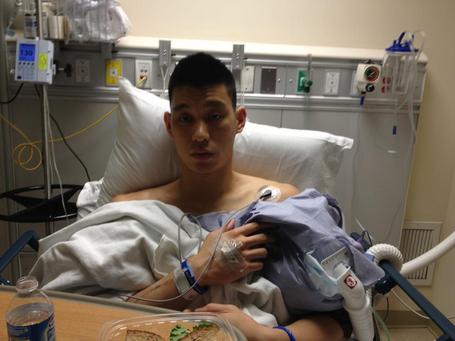 Lookin' sharp, Jeremy! Perhaps we'll learn more in the near future about the extent of the damage in Lin's knee, and maybe we'll even get an updated prognosis for his recovery. For now, we have this photo to confirm that Jeremy had the surgery and is still a person. We cannot confirm the contents of the sandwich in front of him, nor the fate of said sandwich.

We wish Jeremy a speedy-but-full-but-seriously-hurry-up recovery. In the meantime, I am transfixed by the outpouring of comments and "likes" on this photo.