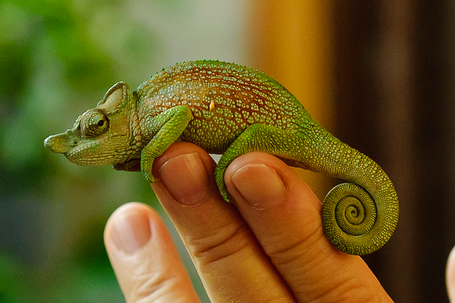 Good morning, squires! How about some links to go with your pre-game meal of shoes and barley? Take the jump for them!

- I don't know how to say this, chameleon, but you've...you've got a really strange nose.

- A breakdown of the standings and seedings right at this moment.

- Amar'e Stoudemire finally spoke the other day and admitted that he'd had back problems all year, and that missing opportunities to work with the Knicks training staff in the offseason had been a big issue. I don't think any of that surprises anybody, except for maybe Surprised Stanley, but he's always surprised.

- With a few games left to play, Steve Novak is riiiiiiight there with some of the greatest outside shooting seasons of all time.

- Dan Gadzuric and J.R. Smith played each other in China back in the days of the lockout.

- Worth noting that Jeremy Lin's sudden rise to fame had a casualty or two: Mike James thought he was a Knick already when Lin proved his worth out of the blue and aborted New York's decision to make a move (James, to his credit, sounds totally cool about the whole thing). Also, Surprised Stanley's head exploded. RIP Surprised Stanley.

- When Tyson Chandler suggests that he could use some rest, I believe him. Mike Woodson's not thrilled with the idea of resting guys, but it sounds like he's considering it. If the guys aren't going to try out there anyway (the Knicks didn't play the Cavaliers on Friday, but if they did, I imagine that they would have given little to no effort) then what's the point of playing 'em? We'll see how things go in Atlanta today.

- I like that Lin is back with the team and participating in film sessions and stuff.

- Finally, here's Clyde gettin' fit. In the time that he did all those things this morning, I rolled back and forth a few times and had a dream that I was buying hand soap and there were like 10,000 different choices and a lot of the brands advertised that they were made by dalmatians ("The dogs, not the people", one of them said) and I wondered when that became a thing.

That's what's up! See you soon for a game thread.