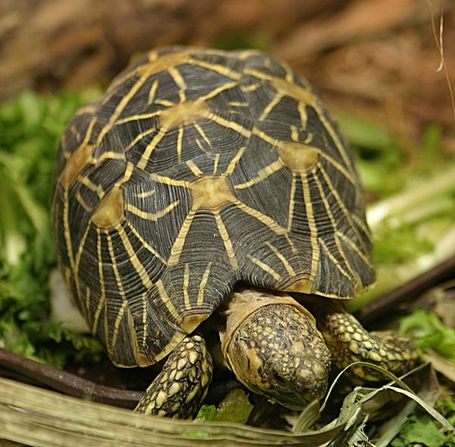 Hello, friends. Are you all having good days? When's the last time you checked your fly? Maybe give it a look, just to make sure everything's zipped. Well done. Let's peruse a few links, shall we? Would you like that?

- Indian star tortoises are pretty handsome tortoises, if you ask me. They pretty much have Macedonian flags all over their shells. (And, indeed, they are named for their shell pattern, not for their celebrity.)

- We're all going out and watching the game on Thursday! You are invited! Please email me if you plan on attending!

- I just want to make sure that everybody's seen Amar'e Stoudemire gobbling invisible porridge after a basket yesterday.

- Video of Josh Harrellson's doomed-from-the-outset "dunk" "attempt" yesterday. Marvin Williams blocked that before Jorts even gathered. Gotta use those Jarts to propel you, big guy! (Cool steal, though. Love that hustle.)

- The good man Jared Dubin went and broke down each Eastern Conference playoff team's quarter-by-quarter efficiency, both on offense and defense. The Knicks' chart might be the weirdest. Fuckin' third quarters, man.

- Scott Howard-Cooper's case for Lin as Most Improved Player.

Hope you enjoyed those links and, in general, I hope you enjoy everything always. More later!