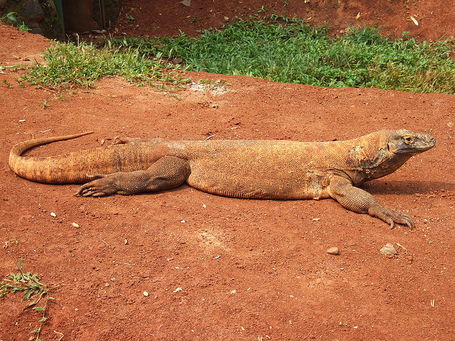 Evening, barn babies. I hope you are all happy and structurally intact. Please consult the links I have arranged after the jump. They are crucial to your well-being.

- I chose komodo dragons for two reasons: 1. I think chrive's daughter asked for them. 2. I would like to encourage the Knicks to play like giant, flesh-eating lizards tomorrow. They don't have to make huge white poops or anything, though.

- I have trouble sitting through previews of sporting events, but, well, I did, and here are some good ones if you're so inclined: John Schuhmann, Seabass Pruiti, Jonathan Fishner, Mike Kurylo, Zach Lowe, Snerf Rosigball. Also, whenever the Yahoo! one goes up, that'll be good. Updates: Hardwood Paroxysm, BDL.

- More on Tyson Chandler's flu. This article made me think for like five minutes about how it's weird that people with the "flu" have to get a lot of "fluids". I don't think I've eaten enough today.

- I also did this video with Coach Nick of BBall Breakdown. I SWEAR I wasn't cutting him off like that every time. It's an error in the recording. I swear I swear.

- Meanwhile, our friend Mr. Leitch breaks down every possible outcome for Knicks-Heat and counts down the top ten wins of the season. (I argued with him about a couple of his choices. I think this ought to be a discussion at the end of the season. In late June.)

- Richard Sandomir cuts into that wicked overlap between the broadcasts of the Knicks and Rangers series.

- This is only tangentially Knicks-related, but it's from a friend of the blog and it's quite entertaining. No, I'm not going to tell you what it is.

That's all for now, friends. We're less than 24 hours away. Shiiiiiiiiiiit.