Share All sharing options for: Pre-Game One Preparation: Knicks at Heat- 4/28/12

THE DAY HAS COME. Let us prepare ourselves.

For Tyson Chandler, a bout of the flu is perhaps the cruelest ailment imaginable. Not only has the virus rendered him too feeble for maximum physical competition, it has made him a hazard to his teammates, forbidding them from close contact with their wise, inspiring teammate. At the very least, the Knicks must find a way to sequester Tyson's virulent body while preserving his vital presence. Chandler is trapped in another dimension, but that doesn't mean he can't mentor our Knicks. I give you... 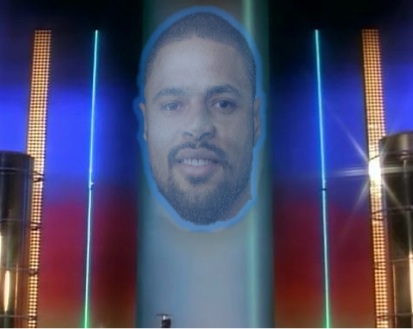 Amar'e Stoudemire: Zydon, I want to honor you in your absence. I want to be the stopper today. I want to anchor this team's defense.

ZYDON: [tries to muffle laughter, which is difficult because his voice resonates quite loudly throughout the cavernous room]

Amar'e: I'm serious, Zydon. Give me the wisdom to stay with my man and contest shots at the rim.

ZYDON: Just stop lunging at people like an asshole. Hold your ground, move your feet, and try to predict their movements and position yourself to block those movements.

ZYDON: It's really not. Everybody knows this.

Jared Jeffries: Zydon, I'm probably going to have to play significant minutes as long as you're in another dimension, but I fear my knee is unready.

Jared Jeffries: Like, not ready. I'm in a lot of pain.

Jared Jeffries: Really, like, neural impulses sent to nociceptors that produce an aversive. My knee hurts so much. It's really swol--

Jared: Oh. Where did you hear that? A Gatorade commercial?

Jared: This has not been even remotely helpful.

Toney Douglas: Zydon, why did--

ZYDON: WHO LET YOU OUT OF THE BROOM CLOSET!?

ZYDON: GET BACK IN THE BROOM CLOSET, TONEY. YOU GAVE ME THIS SHIT. YOU THINK I LIKE BEING TRAPPED IN ANOTHER DIMENSION AND HANGING OUT IN THIS TUBE?

Translating LeBron James's Pre-Game Words From English to Finnish to Korean to Welsh to Gujarati, Then Back to English

"We build a championship, and so back to the postseason for the moment, so I look forward to."

"Here I am, this is my word, my word is the second word in the most, because the pressure will force the time, and that you live and then the power of a large part of the most important time to think and colleagues' system of belief systems, and "

"We believe in a bunch, that you have to play our game, we are very anxious to provide against their own people that I do not think we know what the court has a chance to win basket. We have a comfort level."

"I certainly feel comfortable against the best, I am struggling with is responsible for some of the best postseason hope it will."

Stranger: Looking a teen guy to talk to?

Stranger: i have no clue what your talking about

Stranger: suck me off

Stranger: [something hideously racist that I wouldn't dare repeat]

Stranger: they both suck

Eleven Things You Can Do to Ensure a Knicks Victory

1. Maybe brush your teeth again. This is the postseason. Gotta have the freshest breaths.

2. If you've yet to put on a shirt or are going to change shirts, then choose your shirt blindly. Just close your eyes, grab a shirt, and put it on.

3. [To rid Tyson Chandler of his flu] Slit the belly of a hog with your scimitar, spill the blood at your feet and scream "MERCY!!!!" toward the heavens.

4. Also, ship as many T-cells as you can muster to American Airlines Arena, c/o Tyson Chandler.

6. Light a match. Run the flame under cold water.

8. If you have a freezer, put an unusual item in it. I'm putting a paper clip in mine.

9. Intimidate a squirrel or small child.

10. Flip a coin, catch it, and put it away without looking at which side faced up.

11. Just text the word "Melo" to somebody who won't know what you're talking about. Do not respond to their confusion.