Share All sharing options for: Updates From Today's Practice

The Knicks held a practice in Miami today and opened things up for reporters afterward. After the jump, you'll find some links and tweets from the post-practice media availability.

- This, via Tom Haberstroh, is what reporters encountered when they stepped on to the court: 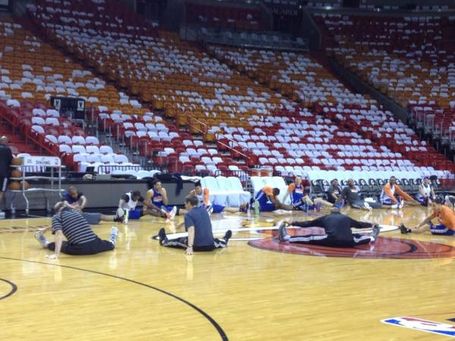 Holy SHIT, Mike Woodson. I'd bring the guy back to coach next year based on that move alone. I've spent a lot of time looking at Woodson, and at no point did I think "oh, that guy could definitely contort his body to fit on a bookshelf".

- Okay, on to things less important than Mike Woodson's magnificent groins: Tyson Chandler didn't practice today, and it doesn't sound like he's feeling any better. He stayed at the hotel getting pumped full of IV fluids and will be a game-time decision tomorrow. I hope they set the threshold for a "let him play" decision higher than they did yesterday, because the guy looked like he was gonna collapse out there.

- Baron Davis spent most of practice getting treatment, but he sounds ready for tomorrow provided he doesn't die in his sleep.

- Jeremy Lin practiced today and sounds ready to do more contact drills by midweek, though the outlook today wasn't as positive as what we heard yesterday. I'm thrilled that Jeremy's back on the court, but I can't really imagine a scenario in which I'd feel anything other than terrified about him returning this season.