Sup PandTers, this is my first fan post and I apologize in advance for any weird formatting or image issues. Shump’s injury really hit us hard yesterday, and the absolute last thing I wanted to hear was the guys on ESPN postulate about how this injury will affect his career and then end up with the wrong impression. They were also talking about D. Rose and he’s a Bull and so I normally wouldn’t care what anyone said about him, but since he and Shump have similar injuries I was sort of forced to listen. Anyway, there’s some real information on this question, so I thought I would summarize it and share it with you guys. The simple answer is that there’s not a whole lot of data, but at the end of the day, or uh 6 months to a year, everything should be practically back to normal. Read on if you care for a detailed explanation of the evidence that supports this.

So we know from the Knicks twitter feed that Shump injured his Anterior Cruciate Ligament (ACL) and lateral meniscus (LM). There have been a few studies on evaluating performance in athletes after ACL repair, but as far as I can find only two on basketball players and only one specifically on NBA players. This is important, because in general running backs or wide receivers for example have diminished performance after an ACL repair (Ref. 1). And extrapolating what Shumpert can do on the court based on say what Willis McGahee can do on the football field is just not good science. The non-NBA basketball study on ACL repair focused on WNBA players over a 10 yr period and concluded that among the athletes that returned, there was no statistically significant overall performance change save for a drop-off in steals and shooting percentage (Ref. 2). I guess this is ok, but Iman Shumpert is not a girl, and girls have sort of different knees than guys, so how that study applies in this case in uncertain.

The one study with NBA players was published in 2009 by a few mostly California based orthopedic surgeons and was led by Benjamin Busfield, who has treated NBA players in the past for various injuries (Ref. 3). I’ve tried here to make as honest and objective of an outline of the study as I can and I included all the figures in the article for completeness. I saved my personal comments on the data for the end and explicitly state where it’s mine and not the author’s commentary.

Background and Study Design: Through some NBA database they accessed records on the 1993-1994 through 2004-2005 seasons to see who had what type of injury. The database they used left out things like surgical technique or graft type. Of the 1144 NBA players in that period, 31 players had ACL tears and 4 were excluded for analysis for things like multiple previous injuries or never having played in a game, so the final number was 27, or about 2% of all NBA players. Of those 27, only 2 players had the same exact injury that Shump currently has (Table 1). 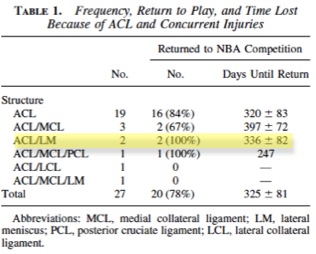 The goal of the study was to assess on the court performance after ACL repair, and they measured this in a couple of ways. One way was to take a bunch of statistical categories including PER and compare what happened to the injured players’ stats before and after surgery. The other way was to use healthy NBA players as a control group, and for each injured player identify a comparable group of NBA players based on "demographic factors (e.g., height, weight, age, and years of NBA experience), offensive productivity, and defensive statistics relative to the injured player’s productivity in the years before surgery" and see how PER compared between the two groups after the injured player had surgery.

Of the 27 players they included, 21 returned to play and 6 did not. Of the players that did return, 12 had a decrease in PER, 5 were unchanged and 4 improved (Figure 1). With comparison to the group of healthy NBA players, there was a decrease in PER, but it was not significant. To clarify this point, the authors write, "No statistically significant differences were observed between the injured group and comparison group, although a marked, though nonsignificant, change in the PER was observed in the study group after ACL reconstruction (Figure 3)". 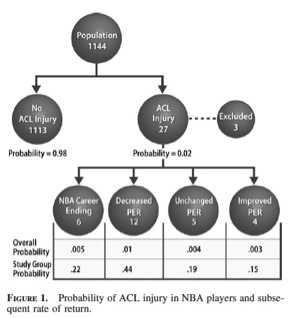 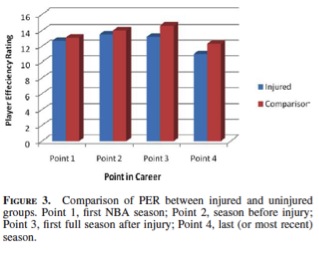 Of the players who did return, the average career length was 4 years post injury, but this not was age adjusted and the authors note that, "14 (51.9%) of the players remained in the league for longer than the 4-year average. Several of the players in the study group are still participating, further increasing the average ". This was the only time that authors broke down the data by position, and on this subject they write, "Player position may influence the ability to return to play, but given the small study group and versatility of positions in basketball, the conclusions from these data are uncertain (Table 2)"

The study looked at 14 player statistics and evaluated changes in the statistics after the injured player came back from surgery. Of the 21 players who returned to the NBA, The only statistical significant decreases occurred in games played (I assume per season but this is never explicitly mentioned), FG% and turnovers per game, as in the player returning from injury had significantly fewer turnovers per game (Figure 2) . 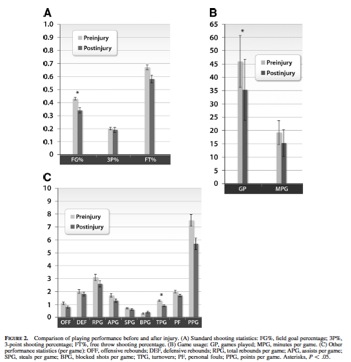 "After ACL reconstruction in 27 basketball players, 22% did not return to a sanctioned NBA game. For those returning to play, performance decreased by more than 1 PER point in 44% of the patients, although the changes were not statistically significant relative to the comparison group."

Personal comments and how this applies to Shump: To me this study is really comforting because uncertainty is never a good thing when it comes to injury or illness and this at least helps some. And the results aren’t half bad either. Some key things I took away from this:

1. Shumpert and ok, Rose too were really unlucky on Saturday. ACL injuries are relatively rare in the NBA and in the 10-year period looked at in the study, only 2 players had the same exact injury (ACL and LM tear) that Shumpert suffered. It would be really, really interesting to find out who those two guys were.

2. PER was used in the paper but doesn’t measure things like perimeter defense and is probably not the best measure of the value of someone like Shumpert. The authors themselves noted this shortcoming. As for the other stats, well a lot of factors other than injuries affect them, so it’s hard to pinpoint how much the injury itself has to do with it. For example, maybe a player played in fewer games following an injury because the team he played on decided to draft a person with the same position out of concern. That would have an effect and have nothing to do with the actual inner mechanics of the injured player’s knee.

3. The Busfield paper was from 2009 and although there’s no year-by-year breakdown, most the injuries analyzed in the paper must have occurred 10 to 15 years ago and no injuries occurred earlier than 7 years ago. And again, the results that were only statistically significant were decreases in FG%, games played per season, and turnovers. What the study definitely did not show was that if you came back to the NBA following an ACL tear, the injury ended up being a catastrophic or career changing injury. Players who came back from surgery did not significantly score less, rebound less, or dish out fewer assists and if an ACL tear was career changing, there would have been significant drop offs. I think this is important because medical advances in the past decade, especially in physical rehab and conditioning (see link), make me feel like that on the court performance after the injury now can only be better. And since things went back to pretty close to normal if not back to completely normal in the mid to late 90's and early 2000's, that gives me a lot of hope and makes me very optimistic about Shumpert’s recovery now in 2012.

So that’s it. Shump’s injury was sad and devastating for all of us. But he needs support, not a eulogy. Contrary to the mood yesterday, an ACL tear does not equal complete paralysis from the neck down. I fully expect him to return to pre-injury form. And it’s not because I’m a Knicks fan and that’s what I want to happen, but rather because in everything I’ve read and come across, there’s no evidence and no data that has convinced me otherwise. So here's wishing Shump a speedy and complete recovery and Let's Go Knicks!

Look at all the fancy drills and exercises you have to go through following an ACL repair if you're an NBA player. Written by Eric Waters, head trainer for the Wizards. I couldn’t get to see the videos, but the diagrams and pictures are still pretty interesting.