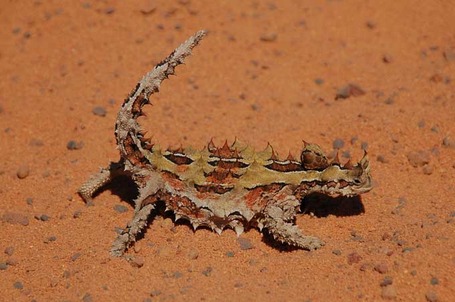 Good morning, pool whales! I'm hardly awake yet, but I still feel compelled to share some links with y'all. These ones came to me in my sleep. I dreamed of reading them, sharing them, then watching each and every one of you click on them, glowing at the Knicks-y relevance of each item.

- Thorny devils, it appears, are loose chunks of stucco that live in Australia?

- According to Howard Beck, Jared Jeffries will give his knee a test on Friday, and could be ready as soon as Sunday depending on how it responds. (I assume athletes have, like, built-in pregnancy test-type assay things in their limbs and joints? Like, Jared will run around, then look down at his knee and see either a minus-sign, meaning his knee still hurts, or a plus sign, meaning he's pregnant.)

- Bill Walker could be back Sunday as well. (And-- the main story in that article-- Baron Davis's knee and back are now bugging him, probably because of the hamstring injury. The strain is metastasizing?)

- If the Knicks make any move-- which doesn't seem to be in the offing-- Alan Hahn imagines them reeling in a veteran big man, not a point guard. He names Mikki Moore and Andres Nocioni just to give a sense of what's out there. Both are available, neither is a likely Knick.

- If Jared Jeffries is pregnant, then I shotty documentary rights. I'll call it "Layin' The Brick". Rude, I know, but I'm a brash, irreverent filmmaker. We've got to challenge these people.

- Mike Woodson and J.R. Smith had a good, long talk about Earl's behavior yesterday-- and not just the Leandro Barbosa incident (which, if you missed it, got downgraded to a type-one flagrant and did not get him suspended). They just talked about Earl's overall demeanor and approach to the game and stuff. I'm very interested to see how Smith responds to that in games to come.

And that's what's up. I'll have more up throughout the day, including (when available) updates on the status of the various injured Magicmen for tonight's game. Have rich, fulfilling mornings, all of you.