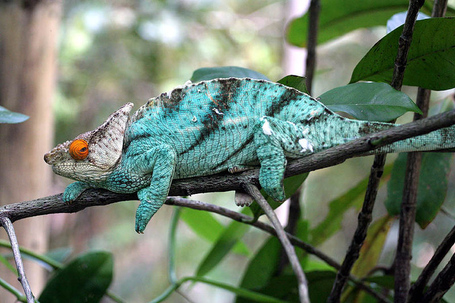 G'ft'rn'n, 'v'r'b'dy. I hope you are all well and not being held captive by anybody. If you are being held captive, just leave a comment and we'll try to help you out. In the meantime, would you mind looking over these links? They're about the Knicks, and I know how you like the Knicks and stuff.

- The wily Parson's chameleon lives in Madagascar and it's one of the biggest chameleons on the planet.

- Here are some things about money and dollars and players on the Knicks that you might find helpful. (the first via MetsFanXXIII).

- And here are our friend Dan's words on the Jeremy Lin (and Steve Nash) thing.

- Here's more of Amar'e Stoudemire discussing the notiong of playing more in the post and stuff.

- You can vote for Amar'e's friendly fake-out of Shane Battier for .gif of the week here, although I gotta admit I'm partial to David Ortiz in a washing machine.

- In celebrating Mother's Day, Tyson Chandler reveals some pretty ballin' pictures of himself as a baby creature.

- Awwwww. Get better, Baron Davis. Hang loose, too, or whatever.

That's all for now. I'll have a thread up for tonight's Clips-Grizzums game up later on. <3