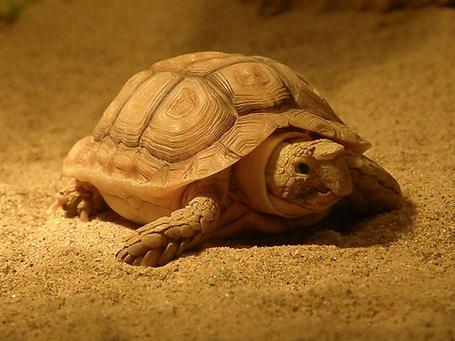 Evening, taste-testers! I'll have a thread up in a couple hours for the night's games. In the meantime, I've found just a few links, and they're unrelated enough that I figured I'd invite this tortoise to help me organize them. You can find 'em after the jump.

- Beaked cape tortoises are: 1. Tiny, which defies my mental image of "tortoise". 2. Also called "parrot-beaked padlopers", which is a wonderful name.

- This is one of my favorite parts of my day so far. Via a Fanshot by Gabem, this Oakley & Allen video is a beautiful reminder of the fine moments we had in 2012:

- And then, on the other end of the spectrum, here's your occasional reminder that the Knicks are a pretty creepy organization. Those Daily News reports that Mike Woodson was being pushed to change agents by the organization have been followed up, and not just by Isola. Howard Beck offered his own explanation of why the Knicks intend to stick with Woodson and not even reach out to Phil Jackson. [Reverts to suspending uneasiness and just trying to enjoy the basketball team]

- For those of us who were waaaay to hung up on the "85%" thing during the Heat series (most notably, one of the individuals mentioned above), Jeremy Lin clarifies things.

- Here's the transcript of Jared Jeffries's rather candid, informative interview on ESPN radio.

- I just want you guys to know that I intend to purchase and eat a pulled pork sandwich very soon and I'm really excited about it and the thought of it is making it really difficult to concentrate.

- I don't know what's going on at Pounding the Rock, but it involves the Ninja Turtles and the Knicks and 1984 and I really don't know.

- The folks at Knicks Bricks give their own breakdown of some free agents that might be available.

That's it for now. I mostly just wanted to share that video and get all the sketchy stuff with Woodson's agent out there. I like the former thing a lot better. Thread later!