Amar'e Stoudemire is going to The U.

Share All sharing options for: Amar'e Stoudemire is going to The U.

One of P&T's favorite offseason past times is trying-- quite creepily-- to figure out how the Knicks are spending their summers. Back in the old days, it was all about scouring Google News and sending SB Nation-branded surveillance satellites into orbit. These days, Twitter expedites the process. We, for instance, already have a good idea of how Amar'e Stoudemire will spend at least a portion of his offseason: 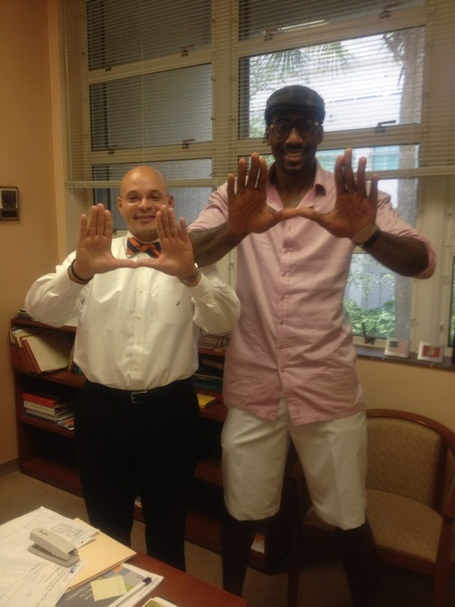 Yeap, Amar'e's going to The U. Here's the tweet that accompanied the above photo:

Just enrolled at the University of Miami. Working on continuing my education

1. I tried to ask Amar'e on Twitter what classes he intends to take, but he rarely responds to people-- even disreputable Knicks bloggers posing as tapirs-- on there. Other people responded with one of two hiLaRiOuS jokes (either "fire safety" or "defense and rebounding") but I'd assume he's taking some ancient history/theology classes, right? That seems to be his thing.

2. Since I know somebody's going to say it: Yes, I'm sure he will also be practicing basketball sometimes.

4. In other Knicks Twitter news: J.R. Smith has what appears to be a sneaker library.

5. Isn't there a thing called a "schoolboy cap"? I was going to make some joke about Amar'e's hat and being ready for school and stuff, but a Google image search turned up several versions of this. I'm not kidding.