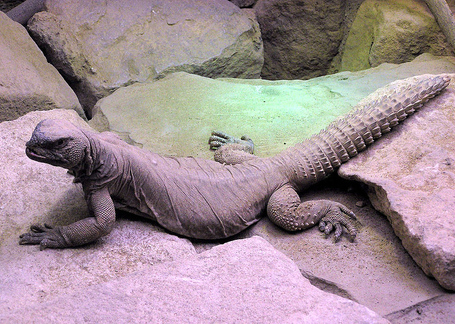 Good morning, radio personalities! I know it's early, but I've got a few links to share. Can you handle a bunch of links before lunchtime? Maybe have a quick snack first. Cool. Now take the jump.

- The mastigures are a genus of big ol' lizards that live all throughout the Middle East, North Africa, and South Asia. Dry places. The Egyptian species are among the biggest of them. I just really like the word "mastigure".

- Today's big news-that-isn't-actually-news is that Mike Woodson is expected to sign his extension within the next few days. It's been reported for a while that an extension is coming. We'll see if it actually happens this week.

- The Knicks' first pre-draft workout is tomorrow and will include Tu Holloway of Xavier. I imagine we'll know more of the names in the near future.

- I don't really understand what's going on in this video, but I do know that it's from the "Webby Awards" (which, it seems, are awards for internet people, not for talented spiders). It includes Spike Lee rambling at a podium in a stupid hat, somebody making awful pre-recorded jokes on behalf of Grantland, Skip Bayless, and DJ Steve Porter. Come to think of it, this might be one of the most nightmarish five-minute video clips I've ever laid eyes on. For some reason, Jeremy Lin was roped into the thing, the poor guy.

- Ian Levy of HIckory-High is very good at making smart and fancy things about basketball. Here are some exceedingly cool charts he created that show each team's most effective and most popular plays (the Knicks are one of those teams, and you'll notice that their chart has a rather pronounced stalactite). THIS stuff looks like it deserves a "Webby Award". It's on the internet, which is good, and it actually looks like some webs. Also, it doesn't include Skip Bayless.

- Tom Ziller reflects on the '08 draft and sees another A-grade selection for the Knicks! Good job the Knicks! All those great picks ended up getting you Carmelo Anthony! That's good, right?

- Iman Shumpert is rehabbin'. This is one of the lovely aspects of Twitter. I like these little updates.

- I didn't know much about the late former Knick Bob Boozer. This article taught me learn a little.

Them are the links! More later!