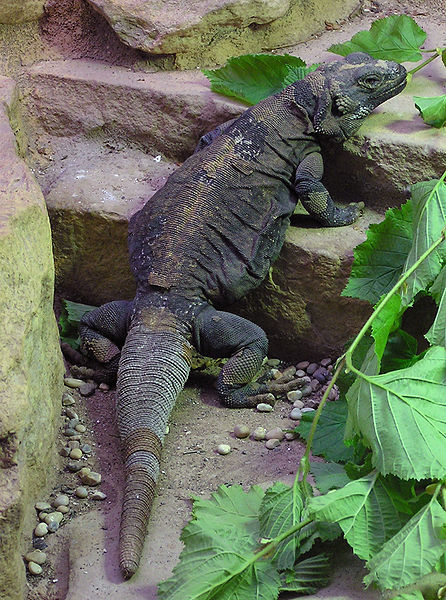 Good day, gauchos. I hope it's been a good one for you and that you haven't had any confrontations with swarms of bees. You know, unless you're into that kind of thing. If you'd like to take a break, I've got a bunch of links to share after the jump.

- Check out this bit from the Wikipedia article about the common chuckwalla:

Harmless to humans, these lizards are known to run from potential threats. When disturbed, the Chuckwalla will gulp air, distend its body and wedge itself into a tight rock crevice. The Chuckwalla will inflate its body with air in order to entrench itself.

Aaaaaand I have a new favorite lizard.

- Tyson Chandler was named to the All-Defensive SECOND Team despite being the league's Defensive Player of the Year (the teams are voted on by "coaches", the awards are voted on by writers). Whatever. Iman Shumpert got some votes as well.

- I hadn't really considered this, but we learned in a sort of hilarious, roundabout fashion that Jerome Jordan will play for the Jamaican national team. In related news, I will only start rooting for the U.S. once Jamaica gets eliminated from Olympic contention, however that works.

- Ziller's journey through past NBA Drafts takes us to 2009, when the Knicks didn't do so hot and, once again, traded away most of their haul anyway.

- Steve Novak: Deadly from everywhere around the arc, but especially that right elbow.

- Here's a lovely recollection of the spirit of Latrell Sprewell in The New Yorker. Gem of a description:

...didn’t so much dunk the ball as attack the rim like some kind of velociraptor who wanted to tear it off and take it elsewhere to eat

- Jeremy Lin needs to stay a Knick because Jerry Maguire.

- I talked to my friends at Raptors HQ for their project comparing the Raps' situation to that of other NBA teams. My sick brain and twisted priorities kind of wouldn't mind being a Raptors fan (if it was a choice), but they pretty emphatically believe that the Knicks are better off, so that's cool.

- Our friend Keith Schlosser spoke to Bill Bradley about his new book and basketball and the Knicks and stuff.

- Still no final word on Mike Woodson's extension, though everyone says it'll happen today or tomorrow. I'll pass along that news when it does happen.

That's all for now! Enjoy yourselves.