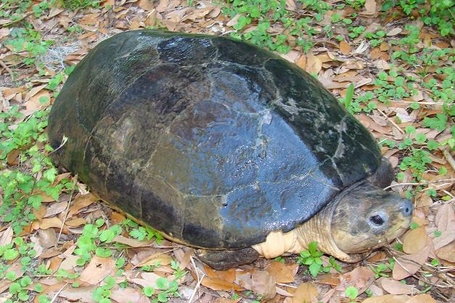 Good afternoon, hypnotists. How are you? How are your shrubs? Do you have any shrubs? If you do, I hope they're well. Want to look at some links? Sure you do. Take the jump.

- Malaysian giant turtles are endangered, in part because people think they are delicious.

- Our friend Jim Cavan comes to terms with his enjoyment of the Spurs. I still find myself rooting against San Antonio, but not because of the '99 Finals. It's more because they're so goddamned perfect and smug and I'm jealous.

- Jeremy Lin ended up with the trademark for "Linsanity" after all. Do I have to say Linsanity™ now?

- Carmelo Anthony twat some silliness about that new energy drink brand he's with, then David Roth and Eric Freeman had a whole mess o' fun with it.

- Um, here's the Demon Coach being exceedingly diplomatic and encouraging about Mike Woodson dumping his agent (also the Demon Coach's agent) to appease the Knicks. You're making it very difficult for me to maintain my irrational spite for you, Demon Coach! You kind of sound like a really decent guy to the point where I'm forgetting why I ever disliked you!

- The details about J.R. Smith's arrest are out, if you're interested. It sounds like the Miami cops were bored, saw J.R., realized that there was a bench warrant out for his arrest, and snatched him for missing a court date a while back. Basically, J.R. didn't do any new stuff wrong except return to state in which there was an open warrant for his arrest.

- I don't know precisely what's going on here, but I saw Gian tweet it and I LIKE it!

- Iman Shumpert's mixtape is going to be large. I hope it's not too large to fit in a tape deck, because that would defeat the whole purpose!

That's all for that!