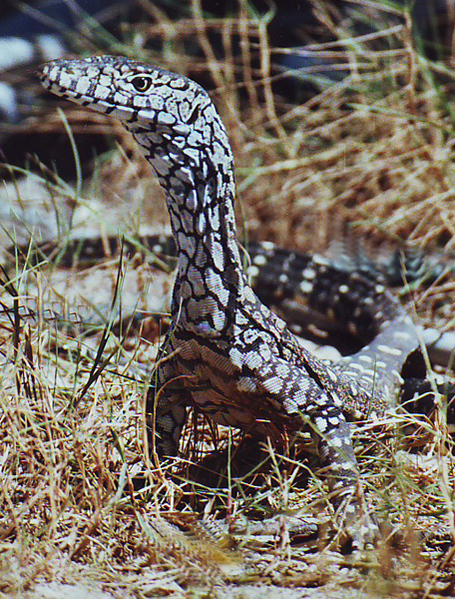 Good afternoon, children! Sorry that it's been quiet (silent) today. Not much going on with the Knicks. They were supposed to have another workout, and I assume that actually happened, but I've heard nothing about it. There'll be a thread up later for Spurs-Thunder. In the meantime, some links.

- One of the best parts about switching from mammal-themed link posts to reptiles and amphibians is that I know way less about the cold-blooded bros, so I'm learning about a lot of new animals. Today, I discovered the pirentie, a GORGEOUS and very cryptic Australian species of monitor lizard (goanna). It is, in fact, the biggest monitor lizard in Australia, and it is quite large indeed. Very cool. I actually yelled "WOW!" out loud when I saw the photo above.

- Jim Cavan started off Knickerblogger's report card series with a final grade for Tyson Chandler. He got a good grade. (Not sure if we're gonna do our report cards again. Those were almost entirely from Gian's sweet brain, so bug him about it.)

- Jim also made the case for Lamar Odom, New York Knick (provided the Mavs release him and he's willing to play for relatively few dollars) in the Times.

- The BayHawks would like to get even tighter with the Knicks. New York actually had a working relationship with them this season, which was a step in the right direction.

- A love/apology letter to Tyson Chandler from a man who opposed the signing back in December.

- Happy Birthday, Carmelo Anthony! I got you a turkey sandwich but I ate it.

- Toward the end of this interview, Giorgos Printezis (who has a really lovely accent) acknowledges but deflects a question about any interest in the Knicks. He's still got the Greek Finals to play, so his mind isn't with the Knicks quite yet. They surely won't be able to afford him anyway, but it's an interesting name to keep in mind.

Those were the links. I hope you enjoyed some of them. More things later!