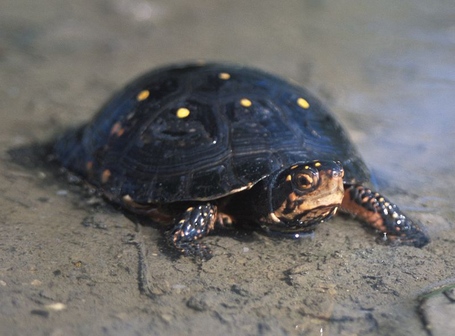 []\'ijo;p[]oihj, friends. "[]\'ijo;p[]oihj" is what my keyboard just typed when I wiped some pickle juice off of it with my shirt, so now it's a new salutation of mine. I like it. I have pickle juice on my shirt now, though. []\'ijo;p[]oihj! (It's also an exclamation of despair). Are you ready for some links? You smell ready. Smell good and ready. Jump for 'em.

- If you live around here, perhaps you've seen a spotted turtle before. They have spots. Yellow ones.

- Knickerblogger's Landry Fields report card gave the sophomore a much better finishing grade than I expected.

- Our friend Scott ponders the potential return of Raymond Felton and questions how well Ray'd fit with a team that's changed quiiiiite a bit since he left.

- David Stern is pretty much asking for the Knicks and Nets to talk shit to each other. He sounds, like, way too into it.

- Carmelo Anthony had his birthday party the other night. It was "low-key" (15 people in a nightclub with champagne sounds like something that would overwhelm me to the point of paralysis, but I get it.) and none of the Knicks were there. I know a lot of them have left New York for the summer, but that bums me out a tiny bit.

- According to my friend Mike, the Knicks are the Jackson 5. Never heard of 'em. "The Knicks", that is.

- A history of the Knicks in the draft lottery.

- Here's your occasional reminder that I go on the radio with the WCWP friends every Thursday at 6:30 PM. It's Thursday today!

That's all for now! There'll be a thread up for Spurs-Thunder and THE SPELLING BEE shortly.