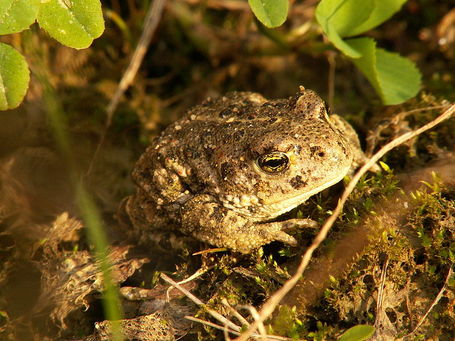 Good day, butternuts. I hope this post finds you in good spirits despite last night's doom. I don't have much for y'all today, but I at least have a few odds and ends and links to share from last night and this morning. Take the jump for a few things.

- Any of y'all European Toastitos ever seen/heard a natterjack? It just looks like a regular toad, but with a yellow stripe down the back, I guess? It's the only species of toad native to Ireland, in case anybody asks you about that today. I bet it'll come up.

- After a miserable offensive outing, folks are questioning Mike Woodson's offensive approach. 'Tis unsurprising, though it's worth remember that it was defense, not offense, that killed New York in Game Two.

- Mr. Leitch singled out this fairly silly J.R. Smith quotation from after last night's game. Earl's self-awareness is unsurprisingly limited, though I will say that he played pretty solid defense on Dwyane Wade last night (recall how Wade got his points) and has, on the whole, been a plenty versatile player for the Knicks this season. Still...

- Two men who might not be long for the Knicks made some pretty beautiful plays last night, and I don't want those to be forgotten just because of all the losing and whatever. I've been watching Baron Davis's crossover and Earl's absolutely preposterous dunk on repeat all day.

- Baron, incidentally, "hopes" he won't need back surgery this summer.

- My friend Scott Schroeder digs into how the Heat have taken Steve Novak completely out of the series (A lot of us would add that Mike Woodson hasn't been especially creative in running sets for Novak, but a lot of it is Miami's defense and Novak's inability to dart around the court like a guard would).

- We all voted on the NBA award things. I don't remember who I voted for a few of the awards, but I do know that I was the guy to pick Stan Van Gundy for Coach of the Year.

- Something something Knicks money something.