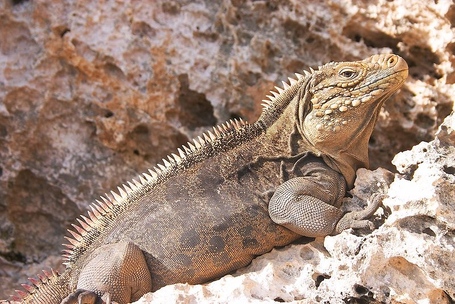 Good afternoon, delicious cheeses. I was just about to go take a walk, but it started raining, so I'll just stay inside and watch soccer and share some links instead. Jump for them!

- I highly recommend reading the second paragraph of the "Conservation" section of the Wikipedia article about Cuban iguanas.

- I'm going to be a judge in the Sprite Slam Dunk Showdown at South Street Seaport on Saturday. It's one of those local amateur dunk contest things that leads up to the bigger one during All-Star weekend. The judges are Darryl Dawkins, two former finalists, and me. I have no idea why this is the case. I'll share more details later in the week, but it's at 4 PM on Saturday at Piers 16 and 17. Again, I have no idea.

- Iman Shumpert is walking without crutches! THE RESHUMPIFICATION CONTINUES!!!!!

- Marc Berman did his thing where he shows up at the Finals and asks the participants if they'll consider playing for the Knicks. It was Derek Fisher this time. He's a possibility, I guess. That would be gross.

- Amar'e Stoudemire's proposal included a trail of roses, a guitarist, and a saxophonist, as any good marriage proposal should.

- Here's a reminder that Earl Bird Rights arbitration hearing is tomorrow, though the decision might not come until later. The union (and, by proxy, the Knicks) are likely to lose, but you never know.

- Another P&T friend, this time Keith Schlosser at the Times, wonders about Ray Allen in New York. I remain mildly opposed to the notion based on personal biases and assumption that playing for the Knicks would explode Allen's legs.

- Amar'e Stoudemire Jr., MVP of his basketball championship and haircuts!

That is all! BASKETBALL LATER!