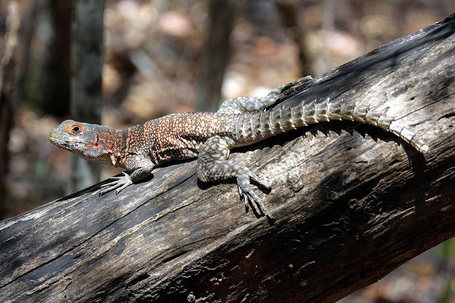 G'day, friends! I've gotta drive somewhere and am being badgered to get going, so let's quickly run through links I've found over the last day or two! To the post-jump!

- Collared iguanas are from Madagascar! They kinda look like they can't make up their minds about what color they want to be!

- Remember when that Mirza Teletovic guy was considering the Knicks? Not so much. Unsurprising.

- Via our own freddy, Landry Fields and Jeremy Lin are expected to show up at this Pro-Am league in San Francisco at some point this summer (hopefully at the same time).

- Via our own WSD, here's that video of Clyde with a bunch of salukis that MSG teased during the season (which is itself a teaser for that back-in-the-day special about Clyde airing later this month). there was a big promotional event of some sort for this yesterday, as well.

- And here's a li'l GQ interview with Clyde. Did you know he likes clothes?

- Remember when Cuttino Mobley was suing the Knicks for discrimination over his heart condition? That didn't really pan out for him. We could still use at the two, Cuttino.

- Another reminder: I'm judging an amateur dunk contest-- the Sprite Slam Dunk Showdown-- tomorrow at South Street Seaport (Pier 16 & 17) at 4 PM. I'm starting to worry that I was secretly enlisted to be the ball, not a judge.

- As of yesterday, I'm gonna be in Vegas from July 18 to 22, so I'll be able to cover the final two games of the Knicks' five-game Summer League schedule in person.

That is all for now! If there are updates to be updated, I'll have 'em for y'all this afternoon.