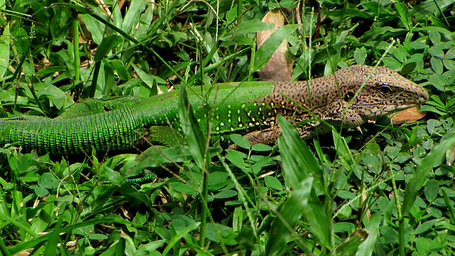 Evening, almonds. I hope you've all had pleasant days and that the walls and ceilings of your homes are in good condition. Floors, too, though I'm not as concerned about those. Take the jump if you'd like to see some links.

- Giant Ameivas are also called "Amazon Racerunners", which sounds pretty cool. Check out the coloration on that male! He looks like half a lizard when he's sitting in that grass!

- Carmelo Anthony is joining some other NBA people in this bizarre special effect-laden Chinese movie. I guess he filmed this when he was in China last summer?

- I'm really looking forward to this footage of Walt Frazier's college days that MSG found and will air this summer, starting on Saturday (that said, I will more than likely forget to watch it).

- Tyson Chandler loves him some capes.

- Chandler (in a cape, perhaps) stopped by a high school in Harlem to inspire them and stuff. Our beloved friend wwert found us the video.

Them's the links! Be well, everyone! Make sure you list any an dall peppers you have consumed or intend to consume today in the comments! It's the law!