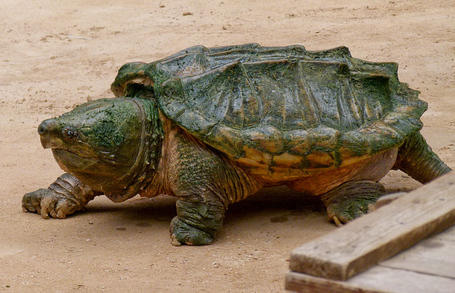 G'afternoon, sweet children. I hope you've found ample shade and water to withstand this sweltering heat. I went outside just to take the recycling out and my face just scorched right off. R.I.P. face. Take the jump for some safe, room temperature Knicks links.

- Alligator snapping turtles, it appears, are just the juiced-up Southern version of the turtles that live around where I grew up. One time a (common) snapping turtle waddled onto the playground and recess got canceled. Dick.

- Hollis Thompson of Georgetown has a sports hernia and had to sit out his workout with the Knicks today. Dominic Cheek of Villanova got a last-minute invitation in his place.

- Thompson's absence is a shame, especially after reading Howard Megdal's profile of him and watching his interview with Jonathan Givony. He seems like a kindly bro who'd fit the Knicks quite well.

- Iman Shumpert's new apartment is not not fancy.

- Remember how J.R. Smith got fined a bunch by his Chinese team for disregarding team rules and missing practices? Well, he's suing them to get that money back. Based on that article, I think there's reason to believe J.R. will use Allen Iverson's "Practice?" monologue as a defense.

- Immediately after Steve Nash said he'd consider offers from the Knicks (which means absolutely nothing), Marc Berman heard there wasn't much chance of him actually signing. Those two stories aren't mutually exclusive in the slightest.

- This is just a nice li'l essay about being a fan of a team and how there's no right way to do it.

- Jeremy Lin and a lot of other famous bros got together to tell you not to hit women. I will throw my support behind that cause, and not just because Jeremy said so. Don't hit women. Don't hit anybody.

- Some Knicks actually ended up winning some of those social media awards.

- Inspired by Baron Davis's role in that Adam Sandler movie, Knicks Bricks ran through some other notable Knick cameos.

- Some more on Lin's agent change.

- Twitter is super down right now. This is terrifying. Is there anybody out there? Hellooooooo

Those are the things! Stay cool, homies. You guys are my homies, right? I kind of just assumed it, but it sounds right.